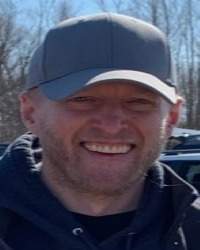 Adam Joshua Murray was born on April 25, 1979, in Fayetteville, NC to Rich and Sandy Murray. He spent
his first four years in Claremont, MN before moving with his family to Albert Lea, MN. He grew up in
Albert Lea and graduated from Albert Lea High School in 1997.
Adam was most often found courtside watching his two daughters play volleyball, basketball and dance.
He was an avid sports fan and for anyone who knew him, Duke basketball or the MN Vikings were
always on screen. SKOL! Unless of course, 311 was playing – 41 live concerts later, the biggest fan award
goes to … His other hobbies were woodworking and pour-painting and sold many pieces of his artwork
over the years.
Adam found his faith during his time in treatment, and since then tried to be an inspiration to those
struggling with addiction or mental health.
He made many close friends throughout his lifetime and was always intentional about keeping in touch
with them.
Adam passed away at the age of 43 after a courageous battle with ALS (Lou Gehrig’s Disease).
Memorials are preferred to the family to help with educations costs for Adam’s daughters, ages 11 and
17, or to contribute to ALS research.
Adam is survived by his daughters, Madison Rose and Kiley Jo; his parents, Rich and Sandy Murray of
Albert Lea, MN; siblings, Anthony (Sara) Murray of Mansfield, TX, Michelle (Michael) Hanson of Albert
Lea, MN, Jon (Abby) Murray of Albert Lea, MN; a gaggle of nieces and nephews (we’ve lost count!), all
who held a very special place in Adam’s heart; maternal grandparents, Orlo and Karen Krause of Dalhart,
TX; paternal grandmother Ruth Murray of Claremont, MN (go Parrots!); and many aunties, uncles and
cousins where countless memories were made.
Adam is preceded in death by his paternal grandfather, Richard “Dick” Murray.
Funeral services for Adam will be held on Thursday, November 17, 2022, at 10 a.m. at First Presbyterian
Church in Albert Lea. Rev. Charles Teixeira will officiate. Burial will be at Lakewood Cemetery. Visitation
will be held Wednesday, November 16, 2022, from 5 p.m. to 8 p.m. at Bayview/Freeborn Funeral Home
and one hour prior to the service at the church on Thursday.

To order memorial trees or send flowers to the family in memory of Adam Joshua Murray, please visit our flower store.