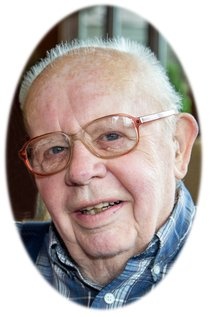 Funeral services for Alan Keith Krueger, age 85, of Albert Lea, will be held at 11:30 a.m. on Friday, January 13, 2016 at Bayview/Freeborn Funeral Home.  Rev. Randy Baldwin will officiate. Interment will be at Lunder Lutheran Cemetery. Visitation will be one hour prior to the service at the Funeral Home on Friday.

Alan Keith Krueger was born August 9, 1931 in Albert Lea, the son of W.W. and Mildred (Eide) Krueger. He graduated from Albert Lea High School and attended St. Olaf College and then Macalester College for Accounting.  On January 16, 1955, Alan married Pauline Derscheid at Moland Lutheran Church in Kenyon, Minnesota. Alan was a member of Lunder Lutheran Church in Twin Lakes and the Emmons American Legion.  He was a self-employed accountant up until 2016.  He enjoyed cribbage, dartball, and sweets, volunteering with the Twin Lakes 4-H Club, including coaching softball, and he loved the Freeborn County Fair. Alan greatly loved his family, especially his grandchildren.

Alan was preceded in death by his parents and brother, Paul Krueger.

To order memorial trees or send flowers to the family in memory of Alan Keith Krueger, please visit our flower store.