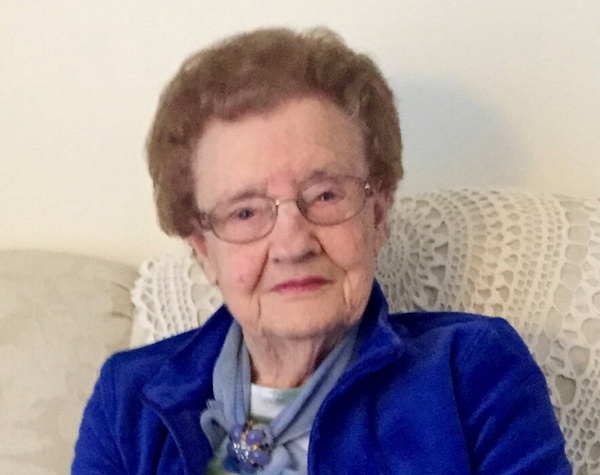 In November, due to failing health, she was accepted into the Mayo Hospice Program and received their compassionate and loving care until her passing.

Funeral services for Alice Malinda Dugan, age 101, of Albert Lea will be held at 11:00 am, Monday, March 1st at Bayview Freeborn Funeral Home, with visitation starting at 10:00am. Masks and social distancing will be required. The Rev. Don Malinsky will officiate. Interment will be at Hillcrest Cemetery following the service. The service will be livestream via Bayview Freeborn Funeral Home’s Facebook Page.

Alice Dugan was born on January 13, 1920 in Ellendale, MN to Ralph and Mabel (Sawyer) Burshem. She is the 7th of the nine children in the Burshem family. Alice graduated with high honors from Ellendale High School in 1938. Following high school Alice attended Albert Lea Junior College for two years studying home economics.

On January 23, 1945 she and Jerome “Jerry” Dugan were united in marriage at the First Methodist parsonage in Ellendale, Minnesota. Following their marriage, they lived in Wyoming until Jerry completed his military duty. After Jerry’s discharge, they established their permanent residence in Albert Lea where Alice spent her remaining 77 years. During this time Alice was employed at Kroger Foods until their closing and then worked at Wilson’s Meat Packing Plant as a restaurant cashier until her retirement at age 62.

Alice always enjoyed serving others. She was involved in her church circle and bible study throughout her lifetime, served several years on her church Alter Guild, and until recently continued to prepare whatever food she was asked to provide for Trinity Lutheran Church. She was also involved in the VFW and American Legion auxiliaries. Alice was an avid bowler until well into her 80’s. After retirement she enjoyed crocheting and created many beautiful gifts for her family and friends. Alice was also a lifelong Minnesota Twins fan. Alice will be lovingly remembered for her wonderful sense of humor and infectious laugh. She had a few tricks up her sleeve to entertain us all.

Alice and Jerry enjoyed spending their summers catching fish and entertaining family and friends at their cabin on Lost Lake in Hackensack, MN.

To order memorial trees or send flowers to the family in memory of Alice Malinda Dugan, please visit our flower store.