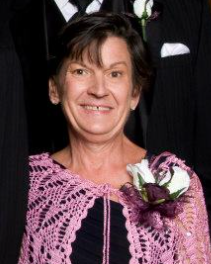 We are saddened to announce that Angeline “Angie” Bryant, 67 years old of Albert Lea, MN passed away on January 12, 2023.  Angie was born on October 3, 1955 to Thomas and Laurie Burns in Hammond, Indiana.  While growing up in Illinois, Angie enjoyed babysitting and working at Artize Pizza.  She also volunteered at a nursing home, which is when she decided she wanted to pursue a career in Nursing. After Angie graduated from Thornridge High School in 1973, she when onto study Nursing at Saint Xavier University in Chicago.  After graduating with her Nursing degree in 1977, Angie worked as a Registered Nurse and then decided to pursue her Master’s at Loyola University in Chicago.  After receiving her Master of Science in Nursing, Angie worked at Bradley University as a Professor in the Nursing program.

In 1985, Angie married George Bryant and went on to have two children, Jeffrey and Zachary Bryant.  Once Angie retired, she spent her days volunteering at animal shelters, traveling, and gardening.  In July 2021, Angie moved to Albert Lea, Minnesota to be close to her grandchildren, Kennedy and Tucker Bryant.  She loved nothing more than spending time with her grandkids playing at the park, doing makeovers, painting nails, and dress-up.

Services will be held at Bayview Funeral Home on Tuesday, January 17.  There will be a visitation at 1:00pm with a service to follow at 2:00pm.

To order memorial trees or send flowers to the family in memory of Angeline Bryant, please visit our flower store.