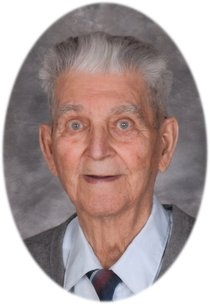 Funeral services for Arnold W. Lund, age 97, of Albert Lea, will be held at 11:00 a.m. on Friday, July 8, 2016 at First Baptist Church in Clarks Grove.  Rev. Jamie Cameron will officiate. Interment will be at Clarks Grove Cemetery.  Visitation will be one hour prior to the service at the church.

Arnold W. Lund was born September 10, 1918 in Bath Township, the son of Hans and Grace (Hanson) Lund. He grew up in Bath Township, attending country school and Clarks Grove School.  After school, he farmed with his family and worked as a hired man.  On October 7, 1937, Arnold married Laura DeBolt.  Together, they raised seven children and purchased their farm two miles west of Geneva in 1942.  Arnold had a dairy herd and farmed 80 acres. He married Dorothy Christenson on November 30, 2001; they were later divorced.  Arnold was a member all of his life at First Baptist Church of Clarks Grove.  In his later years, he enjoyed camping and wintering in Bibleville, Texas.

To order memorial trees or send flowers to the family in memory of Arnold Walter Lund, please visit our flower store.