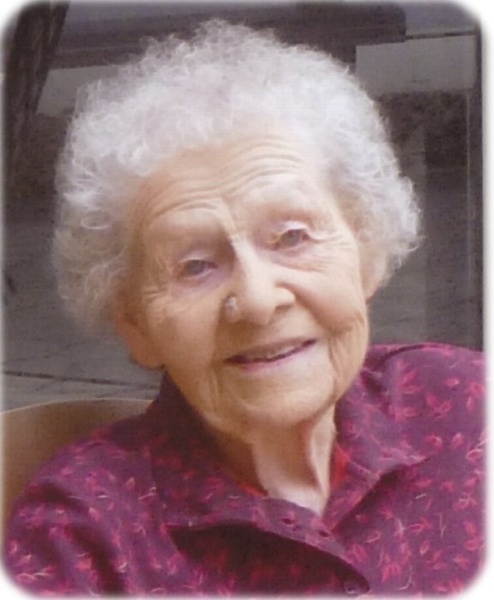 Funeral services for Beatrice “Bea” Moe, age 102, of Albert Lea, will be held at 1:30 p.m. on Sunday, January 6, 2019 at First Lutheran Church in Glenville.  Rev. Don Malinsky and Vicar Joshua Blair will officiate. Interment will be at Glenville First Lutheran Cemetery.  Visitation will be one hour prior to the service at the church. Online condolences are welcome at www.bayviewfuneral.com.

Beatrice “Bea” Alice Amanda (Wolff) Moe was born on August 4, 1916 on a farm in rural Glenville, Minnesota to Emil and Agnes (Straka) Wolff.  Bea was baptized on January 5, 1917 at Evangelical Luther Church in Park Rapids, Minnesota and was confirmed on June 10, 1930 at First Lutheran Church in Glenville by Rev. AC Korsrud and had been a life time member there.

During Bea’s early life she lived on the farm, helping her dad outdoors and loving the animals and nature.  Bea attended school in District 52 near Glenville and graduated from Albert Lea High School in 1934.  Bea attended Austin Teacher’s Training College in Austin, Minnesota.  After college, Bea taught elementary grades at District 52 for two years and District 35 for three years.

On September 1, 1940, Bea married Helmer Moe at First Lutheran Church in Glenville.  They lived in Glenville in the house they built for 67 years.  Bea had been a homemaker all her life.  During this time, she taught Sunday School over 41 years and being its superintendent for several years.  She also taught Vacation Bible School and was a member of the First Lutheran Church Women - the Mary Martha Circle - holding offices in each.  On the church council, she was the first woman deacon, was financial treasurer and prayer chain chairwoman for many years.  Mission projects were always special to her – especially making soap and quilts.

Beginning in the early 1950’s, she had a ride service for several elderly ladies who had appointments in Albert Lea.  This covered about 25 years.  She was a volunteer in the Ground Observer Corp of the United States Air Force after World War II during the Korean War receiving recognition for over 10,000 hours of service for identifying planes from the United States Air Force.  Bea was always available to anyone who needed her in time of illness.  Bea cared for her mother for many years.  She was also a care giver to many other family members.  Bea wrote over 220 personal poems for bridal showers, wedding anniversaries, or any special occasion for many years.

Bea enjoyed her nieces and nephews, and her great and great-great nieces and nephews, going to their school activities and sports.  They were “her family”.  Bea loved to babysit them and bake and cook their favorite foods.  Bea also enjoyed gardening, the flowers, and trees, marveling at God’s creations.  In later years, she and Helmer enjoyed traveling the United States, including Alaska.  The only state they did not visit was Hawaii.  Besides the mission quilting, Bea crocheted, liked to read, and do crossword puzzles.

Bea and Helmer moved to Knutson Place in 2007.  After Helmer passed away in 2008, Bea spent many hours walking and visiting people at St. John’s.  Bea was a devoted Christian who shared her faith with everyone she met.  Bea helped with the “snack cart” at Knutson Place every week until just a few years ago.  Bea also rode the Knutson Place van to do her shopping at Walmart, Shopko, and Nelson’s Market Place until she was over 100 years old.  Bea enjoyed her visits from family.  She always had snacks and candy bars. Bea loved decorating her apartment door with family pictures. Bea lived independently in her apartment until December 18, 2018.

To order memorial trees or send flowers to the family in memory of Beatrice "Bea" Alice Amanda Moe, please visit our flower store.