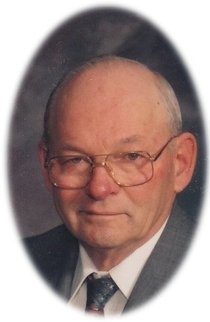 Funeral services for Bernard G. Meincke, age 87, of Albert Lea, will be held at 11:00 a.m. on Monday, July 25, 2016 at Bethlehem Lutheran Church in Glenville.  Rev. David Efflandt will officiate. Interment will be at Pilgrimâ€™s Rest Cemetery in Myrtle.  Visitation will be one hour prior to the service at the church.

Bernard G. Meincke was born October 18, 1928 in Lake City, Minnesota, the son of Maynard and Henrietta (Stehr) Meincke.  He grew up and attended school in Lake City.  On November 9, 1949, he was united in marriage to Melba Will.  A farmer for many years, Bernard was a member of the Eagles Club of Albert Lea and volunteered with the Myrtle Fire Department.  He enjoyed fishing, bowling, and traveling in the motor home and on REA Trips, including some to Europe.  He also enjoyed dancing at the Eagles.

To order memorial trees or send flowers to the family in memory of Bernard Meincke, please visit our flower store.