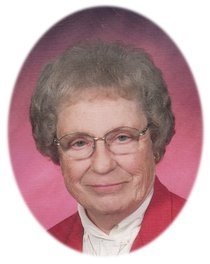 Funeral services for Dean â€˜Bettyâ€™ Twait, age 91, of Albert Lea, will be held at 10:30 a.m. on Wednesday, December 14, 2016 at Zion Lutheran Church.  Rev. Robert Stohlmann will officiate. Interment will be at Riverside Cemetery in Blue Earth.  Visitation will be one hour prior to the service at the church on Wednesday.

Dean â€˜Bettyâ€™ Vivian Marie Twait was born May 20, 1925 in Blue Earth, the child of Dale and Sylvian (Klatt) Twait.  She was baptized in Elmore, Minnesota on October 11, 1925 by MCA Mueller.  Betty attended Blue Earth schools, graduating in 1943.  She graduated from Hamilton School of Commerce in April 1944.  Betty was a bookkeeper at Wolf Habein Mercantile and then became the buyer in the dry goods department until 1957. She graduated with her Bachelorâ€™s Degree from Mankato State in 1960. Betty later earned a Masterâ€™s Degree in Home Economics Education from University of Wisconsin-Stout. Betty taught in the Albert Lea School District from 1960-1990. She volunteered with the Naeve Hospital Auxiliary, Friends of Library, and Church Librarians. She was active in Zion Lutheran Church.  In 2001, Betty was received the Service to Mankind Award from the Albert Lea Sartoma Club.

Betty is survived by her brother and sister-in-law, Duane and Lillian Twait of Springfield, Ohio; nephews, Gregory and wife Julie of Charlotte, NC and their daughter Emma Twait of the Netherlands, Bradley and wife Marianne of Rochester, NY and their children Benjamin of Albany, NY and Kimberly of Ithaca, NY, Steven and wife Traci of Cambridge, England and their children Rebecca of Bloomington, IN and Erica of Indianapolis, IN; and special friends, and cousin Marva and Truman Gullord.

In lieu of flowers, memorials preferred to the Lutheran Hour, Zion Lutheran Church, or donorâ€™s choice.

To order memorial trees or send flowers to the family in memory of Betty Twait, please visit our flower store.