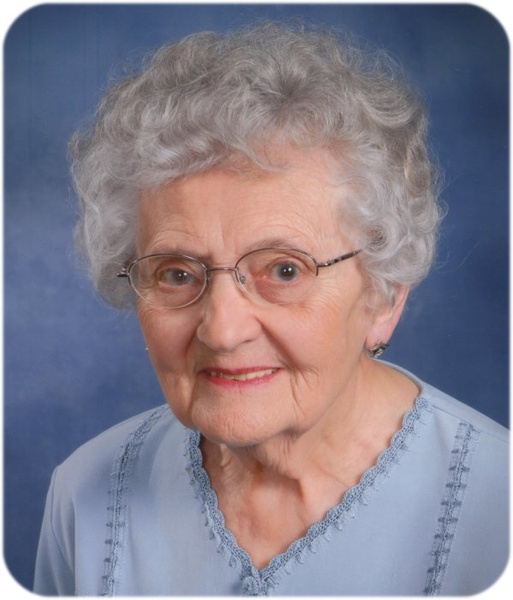 Funeral services for Camilla E.J. Frydenlund, age 98, of Albert Lea, formerly of Hayward, MN will be held at 10:30 a.m. on Monday, September 9, 2019 at Hayward Lutheran Church. Pastor Josh Enderson will officiate. Interment will be at Greenwood Cemetery. Visitation will be from 4:00 – 6:00 p.m. Sunday at Bayview/Freeborn Funeral Home and one hour prior to the service at the church on Monday. Online condolences are welcome at www.bayviewfuneral.com.

Camilla Elizabeth Josephine Frydenlund was born on September 29, 1920 in Myrtle, MN. She was the daughter of Edward and Marie (Potucek) Schradle. Growing up in the Glenville/Myrtle area, Camilla attended country school before graduating from Albert Lea High School in 1939. She also went on to receive teacher training in Austin. Camilla went on to use that training to teach at country school until her marriage. On December 29, 1945 she married Victor Frydenlund at Hayward Lutheran Church and together they had six children. Camilla spent the next 20 years of her life raising her children. She then went on to work as the secretary at Hayward and Sibley Elementary schools for about 20 years retiring in 1985. Camilla was a lifelong member of Hayward Lutheran Church. She was also involved in many organizations including WELCA, Naomi Circle, Sarah Circle, Hayward Senior Center, Hayward Quilting Group, and WFLA. She enjoyed walking, playing 500, and playing piano, which she could do up until one week before her death. Camilla also taught Sunday School, opening exercise at Hayward Lutheran Church, and played piano for WELCA.

Camilla was preceded in death by her husband, Victor in 1988; parents, Edward and Marie; 2 brothers, Edgar (Marion) and Jerome; 2 sisters, Violet Ringham and Mildred in infancy; 5 brothers-in-law and 5 sisters-in-law; 3 nephews and 2 nieces; and many cousins, aunts, uncles, and friends.

Camilla will be missed by all who loved her.

To order memorial trees or send flowers to the family in memory of Camilla E.J. Frydenlund, please visit our flower store.