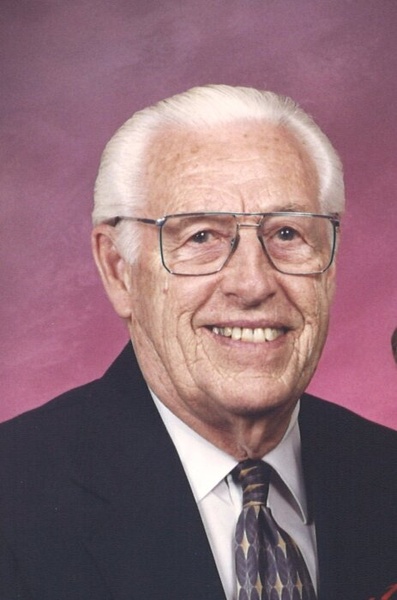 Visitation will be held 12:00 PM to 1:30 PM Wednesday, May 20 at First Lutheran Church. Social distancing rules of 10 people in the church at a time during visitation will be observed. The family asks that all who attend the visitation wear a face mask. A private family service will be held at 1:30 followed by interment at Lakewood Cemetery.  The funeral will be live streamed on our Facebook page. We will stream live at 1:25.

After 102 years of a life lived to the fullest, our beloved Carlyle (Collie) Bjarne Lageson passed away on May 15, 2020. Collie was born on January 9, 1918 to Carl and Cora Lageson in Albert Lea, MN. He attended Albert Lea schools and was a 1935 graduate of Albert Lea High School. Collie attended St. Olaf College for three and a half years, but left college just short of graduation to enlist in the Marines after the events at Pearl Harbor. His life long love of flying developed as he trained to become a pilot. Collie spent seventeen months overseas in the South Pacific, flying in 40 missions, before returning to the United States for reassignment. Collie retired from the military as a full Colonel after serving the Marines for 30 years. Collie married Geraldine (Jerry) Christenson of Hollandale, MN on December 21, 1942. Together, Collie and Jerry had four children: Gail, Larry, Jon and Greg. Collie built their family home from the ground up, which was located on Lake Geneva in Hollandale. He was a talented man, who perfected, restored and crafted many projects. He was also a visionary and entrepreneur who co-founded a potato packaging company with his father-in-law. Together, Collie and Jerry built a beautiful life, enjoying time at the family cabin on Leech Lake, becoming grandparents, and traveling the world before Jerry passed away in 1983. Collie married Jeanne Foxvog Olson on October 27, 1984. Originally friends from Bridge Club and church, Collie and Jeanne’s friendship blossomed into something more. Collie gained two more children, Peter and Martha, Jeanne’s adult children, from her previous marriage. Jeanne and Collie were married for 35 years, making the most of life by wintering in Mesa, AZ and adventuring together through many travels all over the world. They lived together in their own home in Albert Lea before moving to St. Johns on the Water Independent Living within the past year. Collie was a member of First Lutheran Church from the beginning. In fact, he was older than the church. He was a lifelong worshiper, and rarely missed a service. He was not only active within the church, but his community as well. Over the years, Collie was actively involved within Kiwanis, the school board and volunteered at the Freeborn County Historical Society and at the rec center in his community in Mesa. He was proud of his time spent helping his community. His life was a blessing and he was a joy to all who knew him. His smile could warm the room and his sense of humor and laughter blessed all the people around him. An extrovert at heart, he was energized by people and thrived on human interaction. He was an inspiring man who would tell you stories from hand building a sailboat to hitch-hiking to the World’s Fair in Chicago, IL (1933) with nothing but a friend, 20 dollars in his pocket, and a pillowcase full of clean shirts. He was a man who truly loved the life he lived and would share his memories from his adventurous 102 years of life on this earth whenever given the chance. He loved handy work and projects around the house and even built his own gliders. Collie was a hard worker, happy, an outdoorsman, loyal, a story teller, a listener, was known to suddenly break out in song, had a mischievous sense of humor, and was the best husband, father, grandfather, great-grandfather, and great-great grandfather around. He is preceded in death by his parents, his first wife Jerry, and his sister Genevive (Iner) Vollum. He is survived by his wife, Jeanne; his four children, Gail (Bob) Barsness of Edina, Larry (Jaci) Lageson of Mankato, Jon (Donna) Lageson of Mankato, and Greg Lageson of Albert Lea; his nine grandchildren, Eric (Beth) Barsness, Kari Barsness, Krista (Brandon) Winkel, Jamie Lageson, Amanda (Adam) Sik, Trevor (Marie Zabol) Lageson, Nichole (Travis) Wetzel, Amy (Aaron) Ladlie, Brian (Korrissa Bordeaux) Kyllo; his step-children, Peter (Trysh) Olson and Martha (Courtney) Brown; and his step-grandchildren, Taylor Olson, Lexi Olson, Casey (Katie) Brown, Isaac Brown, and Mariah Brown. He is also survived by many loved great-grandchildren and great-great-grandchildren. Memorials may be directed to First Lutheran Church, 301 W Clark St, Albert Lea, MN 56007, the Freeborn County Historical Society, 1031 Bridge Ave, Albert Lea, MN 56007, or a charity of your choice.

To order memorial trees or send flowers to the family in memory of Carlyle B. Lageson, please visit our flower store.