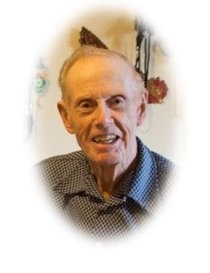 Funeral services for Dale Erling Wallin, age 87, will be held at 2:00 p.m. on Friday, January 6, 2017 at First Lutheran Church in Glenville, Minnesota.  Rev. Nancy Hansen will officiate. Interment will be at Greenwood Cemetery.  Visitation will be 5:00-7:00 p.m. on Thursday, January 5 at Bayview/Freeborn Funeral Home in Albert Lea and one hour prior to the service at the church on Friday. Online condolences are welcome at www.bayviewfuneral.com.

Dale Erling Wallin was born on October 21, 1929, the fourth son born to Rea L. and Mary (Lilleskau) Wallin at their rural Freeman Township, Freeborn County home. He was confirmed at Glenville First Lutheran Church and graduated 8th grade from School District 65 in 1943.  Dale loved inventing motorized bicycles, lawn mowers, and go-karts. On May 1, 1954, Dale married Irma J. Myers at 8:30 p.m. at Deer Creek Valley Lutheran Church.  They farmed and lived on a small acreage in a small house personally built by Dale for two people for one year in Freeman Township.  They moved to Shell Rock Township where they lived and farmed for a year.  Dale and Irma then purchased land in Worth County and became â€œIwegian Farmers.â€  To this union 3 children were born, Thomas, Melanie, and Kyle. He enjoyed farming with Irma, raising chickens, hogs, milking a house cow to have milk and ice cream, sheep, and a cow/calf operation. Dale was proud of his kids.  He was a â€œbig kid at heartâ€ with snowmobiles, 3-wheelers, 4-wheelers, mini-bikes, motorcycles, and go-karts all of which he enjoyed with his kids and grandkids.  Dale was often found giving his grandkids 4-wheeler rides.  He enjoyed cuckoo clocks and his passion was farming; he farmed up to the time of his passing.

Blessed be his memory!

To order memorial trees or send flowers to the family in memory of Dale Erling Wallin, please visit our flower store.