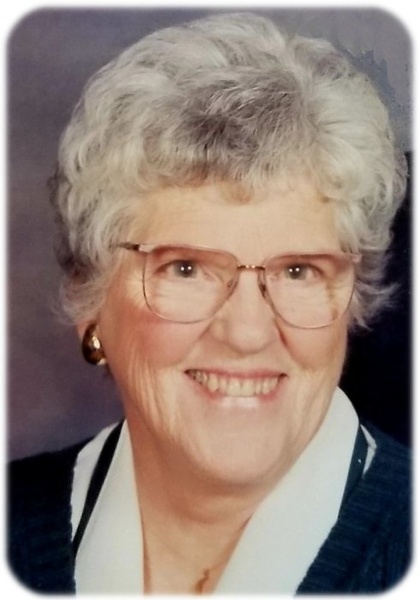 Funeral services for Delores “Dee” Williamson, age 89, of Owatonna, MN, previously of Walters, MN will be held at 11:00 a.m. on Monday, January 14, 2019 at Bayview/Freeborn Funeral Home in Albert Lea, MN.  Rev. Don Rose will officiate. Interment will be at Greenwood Cemetery in Glenville.  Visitation will be one hour prior to the service at the funeral home on Monday. Online condolences are welcome at www.bayviewfuneral.com.

Dee died after a courageous battle with cancer on Tuesday, January 8, 2019 at Homestead Hospice House in Owatonna.

Dee was born on May 24, 1929 to James, Jr. and Selma (Engen) Vanek in rural Glenville.  She grew up in Glenville where she attended Glenville Public Schools and graduated from Albert Lea High School in 1947.  Dee was baptized and confirmed in the Lutheran Faith at First Lutheran Church in Glenville.  On June 27, 1948, Dee was united in marriage to Harold “Hap” Williamson at First Lutheran Church in Glenville by the Rev. A.C. Korsrud.  She was a lifelong homemaker who enjoyed watching her sons in many sporting events.  Dee was a member of United Lutheran Church of Walters where she was a Sunday school teacher and circle member for many years.  Throughout her years she also enjoyed scrap booking and watching the Minnesota Vikings.  For the last 10 years, Dee lived at Morehouse Place in Owatonna where she made many friends and acquaintances for which she was thankful.

Dee was preceded in death by her parents; husband, “Hap”; son, Gary Williamson; sister, Altine Hengesteg; and many brothers and sisters-in-law.

Dee will be sadly missed by everyone who knew her and loved her.

Memorials are preferred to Homestead Hospice House in Owatonna and United Lutheran Church in Walters.

To order memorial trees or send flowers to the family in memory of Delores "Dee" Williamson, please visit our flower store.