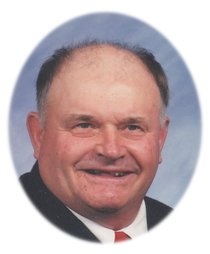 Funeral services for Donald Arthur Perschbacher, age 85, of Alden, will be held at 10:30 a.m. on Tuesday, July 26, 2016 at Concordia Lutheran Church of Pickerel Lake.  Rev. Wendy Anderson will officiate. Interment will be at Concordia Lutheran Cemetery.  Military Honors will be accorded by the V.F.W. and American Legion Honor Guard. Visitation will be 4:00-7:00 p.m. on Monday, July 25 at Bayview/Freeborn Funeral Home and one hour prior to the service at the church on Tuesday.

Donald Arthur Perschbacher was born on August 31, 1930 in Albert Lea, the son of Arthur and Magdalena (Steele) Perschbacher. He grew up on the family farm and attended Albert Lea High School, graduating in 1949. He served in the U.S. Army and was Honorably Discharged in 1956. On June 15, 1958, Donald was united in marriage to Muriel Nancy Adamson at Concordia Lutheran Church of Pickerel Lake.  Donald was baptized, confirmed, married, and was a lifetime member of Concordia Lutheran Church of Pickerel Lake where he served on Church Council, was a Deacon, and a Confirmation Mentor. Donald enjoyed farming, having a dairy herd, raising feeder pigs, and leaving the land in better shape than when he got it. He enjoyed driving his Farmall M and IH350 around the neighborhood. He enjoyed reading, home Bible study, and watching sports on TV. He took care of his wife at home after she was taken sick with MS.

Donald was preceded in death by his parents and wife, Nancy.

He was bound to the land from the day of his birth
His roots anchored deep in the fertile earth
Nurtured, sustained, by the soil he grew
And his life like his furrows ran straight and true.
We love you Dad.

To order memorial trees or send flowers to the family in memory of Donald Arthur Perschbacher, please visit our flower store.