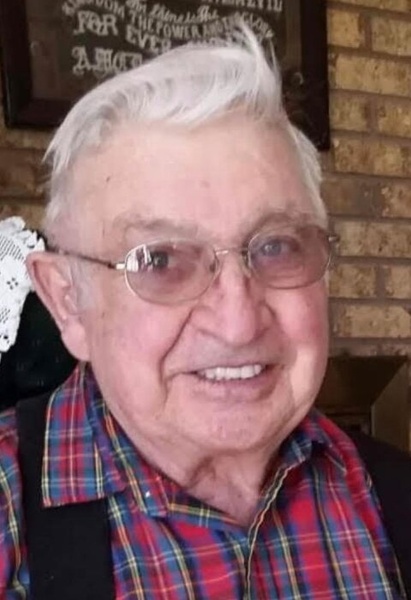 Funeral Services for Donald Viktora will be held at 10:30 a.m. Thursday, February 4, 2021 at Bayview/Freeborn Funeral Home.  Pastor Jesse Krusemark will officiate.  Interment will be at Hollandale Cemetery.  Visitation will be held Wednesday, February 3, 2021 from 5 to 7pm at Bayview/Freeborn Funeral Home and 1 hour prior to the service on Thursday at the funeral home. Facemasks are required at all times for the visitation and funeral.

Donald passed away on Monday, February 1, 2021 at Good Samaritan in Albert Lea, MN.

Donald Edward Viktora was born on December 20, 1929 in rural Austin, MN the son of James and Minnie (Belshan)Viktora.

Donald grew up in the Myrtle area attending country school in Freeborn County. Donald married Henrietta” Bonnie” Alders on December 9, 1951 at Bonnie’s parents’ home in Hollandale. Donald and Bonnie lived many years in Hollandale while raising their 4 children.  They spent the last 21 years of their married life in Albert Lea.

Donald began his own construction business in 1956 which he sold to his son Jim in 1992. Donald was an active member for many years at St. Paul’s Lutheran church serving as an usher, trustee and finance secretary. He served as a volunteer fireman for the Hollandale Fire Department.  Don and Bonnie wintered in Donna, Texas where he worked as a handyman.

Some of Donald’s hobbies included gardening, hunting, taxidermy, Intarsia art (winning a grand   prize at Albert Lea fair for his exhibit), crafts, woodworking, proud of his purple martin houses, and playing cards and jokerboards with the grandkids.  He enjoyed his family, company and visiting with his many friends.

Don will be sadly missed by all who knew and loved him.  Blessed be his memory.

Donald’s family would like to thank the staff at the Good Samaritan Society and Bancroft Estates for their loving care.

In lieu of flowers, memorials are preferred to St. Paul's Lutheran Church in Hollandale or donor’s choice.

To order memorial trees or send flowers to the family in memory of Donald Edward Viktora, please visit our flower store.