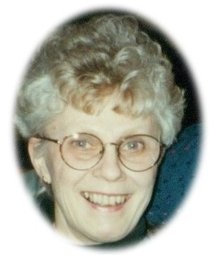 
Memorial services for Donna Lee Johnsrud of Albert Lea will be at 10:00 a.m. Saturday, April 1, 2017 at East Freeborn Lutheran Church.  Rev. Matt Griggs will officiate.  Interment will be at East Freeborn Cemetery.  Visitation will be one hour prior to the service on Saturday, April 1st.
Donna Lee Johnsrud (Davidson) died Sunday, December 12, 2016 at Assured Assisted Living Home in Castlerock, Colorado.
Donna Lee Davidson was born on April 3, 1933 the daughter of Wilma and Donald Davidson in Nashua, IA.  She was baptized and confirmed at Methodist Church in Nashua, IA.  She graduated from Nashua High School in 1951 where she was the Homecoming Queen, cheerleader, played the saxophone and graduated the top of her class.  After High School she attended Mankato Commercial College and graduated with her Secretarial Degree in 1953.  She graduated with honors in the top four out of 180 students.  She was employed by Mankato State Teacher College when she met her future husband Bendy Johnsrud through Jay and Joy Johnsrud.  She relocated and moved on to Jostens in Owatonna as an Executive Secretary.  On March 30, 1957, Donna and Bendy were united in marriage at the Methodist Church in Nashua, Iowa.  Upon marriage she became a courageous housewife of a Dairy Farmer and continued many years as a Mother and Wife.  She worked hard as a Dairy Farmerâ€™s wife and mother cooking delicious homemade meals and always kept an impeccable house.  She was active in East Freeborn Lutheran Church where she taught Sunday School, was in Ladies Aid and Circle.  She was a true perfectionist and always dressed herself, husband and her children with perfection.  After raising her children, she went on to work for St. Johnâ€™s as a receptionist which she enjoyed until she retired in 2010.  After she retired the neighbors would see her out mowing the lawn as she loved that riding lawn mower.
Survivors include Ann Quackenbush, partner Troy Moore and son, Austin of Chanhassen, MN; Jeff Johnsrud and sons, Beau and Jacob of Albert Lea, MN; and Kara (Nick) Thielen of Aurora, CO, and their children, Flint, Brek and Bode; Jim Quackenbush of Chanhassen, MN; Kelly Johnsrud of Albert Lea; MN, sister Kay (John) Mehman of Nashua, IA and brother Dick Davidson of MO.
Donna was preceded in death by her husband Bendy Johnsrud, and parents Wilma and Donald Davidson.
Memorials are preferred to East Freeborn Lutheran Church

To order memorial trees or send flowers to the family in memory of Donna Lee Johnsrud, please visit our flower store.