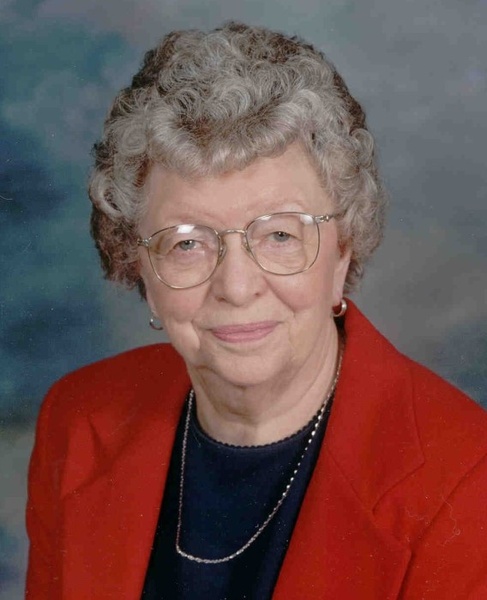 The following was written by Dorothy long ago with a few recent edits.

Dorothy was born November 3, 1921 to Nobel Hansen and Dorathy Bessie Wichmann in London Township, Freeborn County, Minnesota and her mother died three days after she was born. She was then raised by her aunt and uncle, Emma (Hansen) and Victor Nelsen and their daughter Evelyn (Nelsen) Ferber.

She was baptized in the Lutheran church and confirmed at Trinity Lutheran Church by Reverend H.W. Bonda in Albert Lea, Minnesota. Dorothy went to school in Myrtle, Minnesota, high school in Northwood, Iowa (one year) and then graduated from Albert Lea High School.

She married William Bjerke on March 16, 1947. Daughters Margaret (Bjerke) Hatch was born in October of 1948 and Debra Bjerke was born in March of 1954. They also graduated from Albert Lea High School. Both are now retired.

After high school Dorothy worked at F.W. Woolworth for a couple of years then to Land O-Lakes during WWII. After that she worked at Wilson’s and then Northwestern Bell until 1948. When Debra was a junior, she worked at the Senior High Cafeteria (Albert Lea) as a baker for several years – she loved her job. She enjoyed knitting, crocheting, needlework, sewing, family, friends, and life in general.

She is survived by her daughters, Margaret (Bjerke) Hatch and Debra Bjerke; sisters Lucile (Hansen) Greiner and Ruth (Hansen) Peoples; her brother Nobel Hansen; sister-in-law Elaine (Byron) Bjerke; as well as many nieces, nephews, and cousins.

Due to the current COVID-19 situation, a private family burial will be held at East Freeborn Lutheran Cemetery on Monday. A celebration of life will be held at a later date.

Instead of flowers, please donate to the charity of your choice in Dorothy’s name.

We would like to thank both Thorne Crest Senior Living Community and St. Croix Hospice and their staff for their care and kindnesses while mom was with them. They have been a special part of our lives for a few years now and were always there for mom and us too.

To order memorial trees or send flowers to the family in memory of Dorothy B Bjerke, please visit our flower store.