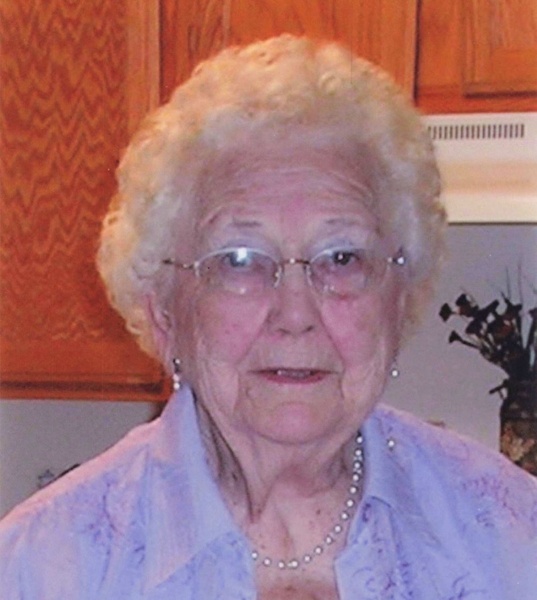 Dorothy Elizabeth Swanson Demmer Gulbrandson entered her heavenly home on September 2, 2022 at the Good Samaritan Home in Windom, MN.  She was born July 25, 1919 to Gifford & Ruth (Olson) Swanson on her grandparents home near Hartland.  She was baptized and confirmed in the Hartland Lutheran Church.  She attended school in Hartland through 8th grade and then graduated from Albert Lea High School in 1937.

She married Wallace Demmer on September 29, 1937.  They were parents of one daughter, Rebecca Jean.  Dorothy was a full-time Mom and also worked on the farm.  They farmed near Hartland until Wallace’s death on February 7, 1981.  She then moved to Hartland in the house that her grandmother had built and then lived in by her parents.

Dorothy was treasurer of the Hartland Creamery; member of Hartland Extension Club; president of County Homemakers; SE District Home Council; Senior Citizens Club; Sons of Norway; various boards at Cross of Glory; member of Glory Bells Choir; accompanied the choir & soloists on the piano.  She attended the ALCW Conventions in San Francisco and Portland; was a member of Hartland 4-H & adult leader.  She & Wallace chaperoned a group of kids to Washington DC & NY in 1976.

Her spare time was enjoyed by embroidering, crocheting, knitting, crafts and crossword puzzles.  She also loved to bake and did canning.  She & Wallace were godparents for 8 children all of whom she prayed for daily.

On August 16, 1986 she married Ellsworth Gulbrandson at Cross of Glory.  They enjoyed 39 bus trips with “Sunshine Travelers” and also other trips.  She enjoyed going to Sweden to visit with relatives of her dad.

She lived in Hartland until 2005 when she moved to Bancroft Creek to be near Ellsworth who was a patient at Good Samaritan. He passed away January 2, 2010.  She enjoyed playing zonk, Bible studies, hymn sings, and trips on the bus for shopping.  In February 2020 she became a resident of Good Samaritan in Albert Lea and in April 2021 she moved to Windom Good Samaritan to be nearer to her family.

A Celebration of Life service will be held on Saturday, September 10th at 2pm at Cross of Glory Lutheran Church in Hartland, MN.  A visitation will be held at Bayview/Freeborn Funeral Home on Friday Sept, 9, from 4-6pm, and also 1 hour prior to the service.  Pastor Kent Otterman will be officiating.

To order memorial trees or send flowers to the family in memory of Dorothy Demmer Gulbrandson, please visit our flower store.