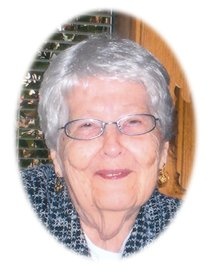 Memorial services for Edith Cyson, age 98, of Albert Lea, will be held at 2:00 p.m. on Wednesday, May 11, 2016 at Bayview/Freeborn Funeral Home.  Rev. Kent Otterman will officiate. Interment will be at Hillcrest Cemetery.  Friends may greet the family one hour prior to the service at the Funeral Home.

Edith C. Czysczon was born November 17, 1917 in Claremont, Minnesota, the daughter of Franklin and Lucy (Chubbic) Dennis.  Edith was the 12th of 14 children and was an aunt by the time she began grade school.  In 1936, she graduated high school in Blooming Prairie.  A nursing school in Northern Minnesota gave her opportunity to learn skills that would help her for the rest of her life.  Edith was always nurturing and caring.  That was one of her many qualities everyone remembers. After a short service stint at a mental institution in Northern Minnesota from 1936-1937, she knew this would not be where she would leave her mark in life!  Edith moved to Albert Lea in 1941.  She worked first at Wilsonâ€™s Meat Packing Company and then later for Munsingwear as a seamstress.  One good outcome from this factory experience was the long-time friendships that continued for decades.  Within a year of Munsingwear closing its doors, Edith returned to the same factory floor as an employee of the Albert Lea Furniture Manufacturing Company.  She worked as a cutter and sewer for furniture for the Spiegel Catalog and Donaldsonâ€™s Department Store.  Her co-workers respected her, and no-doubt with her nimble fingers, she encouraged others how to sew quickly and efficiently.  It was during this time that Edith would meet her future husband, John J. Czysczon.  They were married in the month of May in 1970.

For over 15 years, Edith lived in Senior Towers.  She savored her many friendships and reflected on her blessed life.  In November of 2013, Edith moved into Good Samaritanâ€™s Hidden Creek Assisted Living quarters.  Always thankful, she was once again, at a place that welcomed her and made sure she was comfortable and safe.  She became the oldest resident living there.  With arthritis and a failing body, Edith left our world and joined her parents, siblings, and beloved husband.  Our world is a less brighter place without her.  She will be dearly missed.  We know that she no longer struggles.

To order memorial trees or send flowers to the family in memory of Edith C. Czysczon, please visit our flower store.