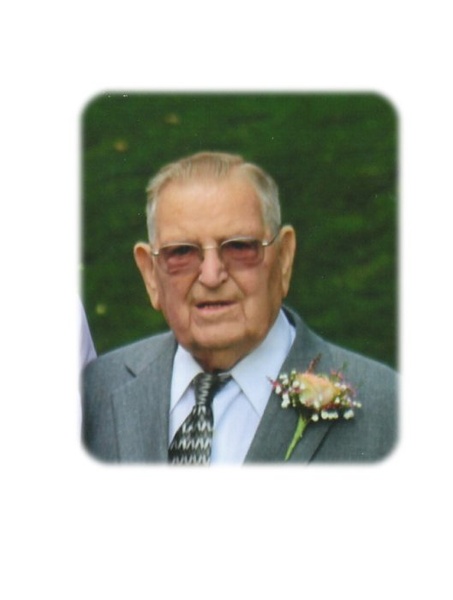 Edward Duane Miller was born at home in rural Ellendale on May 10, 1930, to Edward O. and Ida (Johnson) Miller.  He attended grade school at District 90 and graduated from Ellendale High School in 1948. Edward married Arlene Wright on April 16, 1951, in Clarks Grove.  Ed farmed with his dad and then he and Arlene bought their own farm in rural Ellendale.  They raised their four children on that dairy and poultry farm.  Ed retired from farming and moved to Clarks Grove in 1992.  He helped Gregg Menefee with his used machinery parts from 1992 to 2002. He belonged to the North Freeborn Lutheran Church until it closed in 2000 and then joined Central Freeborn Lutheran Church.   He was President of North Freeborn Lutheran congregation and of the Brotherhood and on the Cemetery board for 20 years.

Ed enjoyed playing cards, canning, making lefse, fishing at the family cabin at Beaver Lake, and listening and dancing to polka and waltz music.  He also enjoyed his weekly breakfast with his brothers-in-law LaVerne Seberson and Milburn Nelson and his weekly visits to his 100-year-old sister Ethel Reistad at the New Richland Care Center with his nephew Bruce Reistad and wife Pam and his niece Virginia Schmidtke.  Ed also enjoyed his son Dale’s Hollandale 3 in 1 Restaurant and all the attention and hugs from the employees.

To order memorial trees or send flowers to the family in memory of Edward Duane Miller, please visit our flower store.