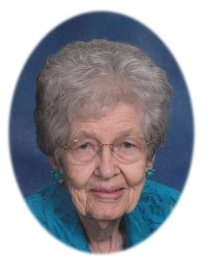 Funeral services for Elaine C. Johnson, age 98 of Albert Lea will be held on Saturday, Nov. 12, 2016 at 10:00 am at the First Presbyterian Church.  Pastor Dwight Netzer will officiate.  Burial will be at the Hartland Cemetery.  Visitation will be Friday from 4 -6:00 pm at Bayview/Freeborn Funeral Home and one hour prior to the services at the Church.  Online condolences are welcome at www.bayviewfuneral.com
Elaine Celeste Johnson was born October 1, 1918, in Cottonwood County, Minnesota to Juel Edwin Kopperud and Mabel Pauline (Olson) Kopperud.  She attended rural school until the age of 11, when her mother died of tuberculosis and her father moved Elaine and her sister, Louise, to Hartland so their grandmother could help with their care.  Elaine graduated from Freeborn High School in 1936.  On Valentineâ€™s Day in 1939 Elaine was married to Walter Johnson at his family farm.  Elaine and Walter moved from the farm to Hartland and then to Freeborn where they remained until their move to Bancroft Creek Estates in 2009.  Recent health problems necessitated a move to Good Samaritan Society in September.  Elaine enjoyed life at Bancroft Creek and valued the care and especially, the caregivers of both places.  Elaine held a number of jobs in grocery stores, cafes, and the canning company.  She even helped farmers pick up corn in the fall after a wind storm in the late 1940â€™s.  In Freeborn, she was the bookkeeper at the Huntting Elevator and found her niche as the secretary of the school board and the district for several years until she retired.  The family of four children remember her as a hard worker, a reliable caregiver, a strict moral guide and most important, a MOM. The first baby did not survive, but Wayne, Judy, Cheryl and Jill made up the family.  Elaineâ€™s interests were many.  She traveled with Walter in their motor home to visit family, fish, build churches and sight-see.  She loved to shop for fabric, but found little time to sew.  She did, however, make quilts with sisters-in-law Carmen and June for several years.  Crossword puzzles, jigsaw puzzles, card playing and reading were favorite pastimes. Watching sports was also  an enjoyment: Twins, Vikings and Gophers, especially womenâ€™s basketball.  It was the only time she turned on her television.  There were difficulties.  Judy and Cheryl had polio in 1948, with long stays at Sister Kenny Institute.  Cheryl died in a car accident in 1969.  Her grandson, John died in a car accident in 1997.  Walter died in 2010 after a lingering heart issue.  Through it all her faith in the saving grace of Jesus Christ never wavered.  Even in her personal struggles with surgeries and fractures and the last illness there was no self-pity.  She was a strong and loving role model to all who knew her.
She is survived by Wayne (Sarah) Johnson, and their son Eric (Deb) Johnson and their son, Noah.  Judy Hellie and daughters, Siri (Mark) Kalthoff and their sons Sean and Tae, Jana (Wayde) Paulson and their daughters Alexa and Sydney.  Jill (Jerry) Morstad and their children, Heather (Jeff) Thuringer and their children Riley, Cole, and Emelia; Timothy (Jackie) Morstad and their son Grant.  Son-in-law Glen (Kathy) Gauss and their daughters, Jeni and Erin.  Also survived by her sister Louise (Donald) Johnson and their children, Steven (Sherri) Johnson and Mary (Erik) Holleque and families and sister-in-law Marvyl Kopperud and her family.
Elaine is preceded in death by Walter, infant son, daughter Cheryl Gauss, grandson John Hellie, son-in-law Ted Hellie, her parents, her stepmother Irene Kopperud, half-brother Gary Kopperud and all of Walterâ€™s siblings  and their spouses.
A large extended family mourns her loss and celebrates her long life.  God bless her memory.
To order memorial trees or send flowers to the family in memory of Elaine Celeste Johnson, please visit our flower store.