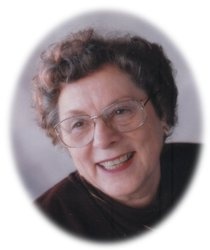 Funeral services for Elaine Elizabeth Lubitz, age 89, of Albert Lea, will be held at 11:00 a.m. on Friday, June 10, 2016 at St. Theodore Catholic Church.  Father Russell Scepaniak will officiate. Interment will be at St. Theodore Cemetery.  Visitation will be one hour prior to the service at the church.

Elaine E. Lubitz was born April 17, 1927 in Easton, MN, the daughter of William and Ethel (Stevermer) Sippel. She graduated high school in Delavan, MN.  On September 26, 1946, Elaine married Michael â€œJackâ€ Lubitz in Easton.  She worked in a hemp factory in Wells during World War II.  They moved to Nicollet where they owned a General Store for 10 years. In 1959 they moved to Easton and in 1966, they moved to Albert Lea where she worked at J.C.Pennyâ€™s for 25 years. In 1983, the couple each got their realtors licenses.  Elaine enjoyed gardening, cooking, and sewing.  She was a member of St. Theodore Catholic Church, the V.F.W. Auxiliary, and the National Catholic Order of Foresters.

In lieu of flowers, memorials are preferred to Disabled American Veterans or St. Theodore Catholic Church.

To order memorial trees or send flowers to the family in memory of Elaine Elizabeth Lubitz, please visit our flower store.