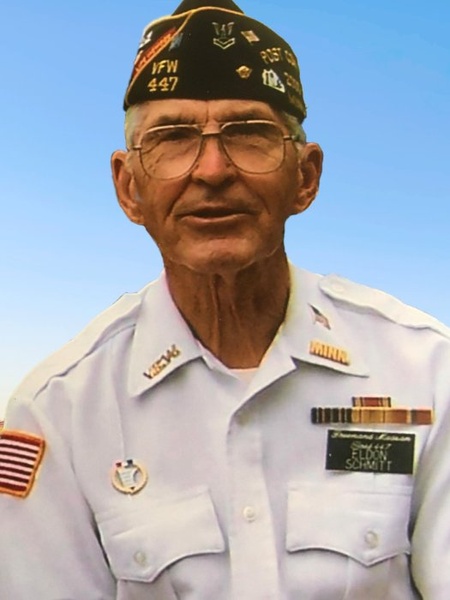 Eldon was born August 14, 1925 to Hannah and William Schmitt on the family farm near Twin Lakes, MN. He was the fifth of eight children. He grew up working on the family farm. He enjoyed hiking, trapping, and fishing.

Eldon attended school in Nunda Township and Emmons High School where he graduated as Valedictorian in 1943. He joined the Navy before his 18th birthday in 1943 as one of the five brothers and one sister who all served in the Navy during WWII. He spent most of his overseas service in the Philippine Islands as a Pharmacist’s Mate II Class on the PGM-11 as they anticipated an invasion of Japan.  He was honorably discharged following the surrender of Japan in 1946.

Eldon attended Minneapolis Business College after returning home, earning a degree in Business Management. He started his career at Kleinpaste Implement in Albert Lea in 1950 and soon after, married Mary Gulbrandson from Emmons, MN. They had five children: Susan, Mark, John, Paul, and Karen. Eldon was co-owner of Worth County Implement in Northwood, IA for several years and then started his own bookkeeping and accounting business in Albert Lea which he operated for over 40 years.  In retirement, Eldon worked for Arends & Associates and considered this a highlight of his career.

Eldon later married Delores Wilson of Mason City, IA. Dee had four children with the youngest daughter Twyla, living at home when they were married. “Dee” passed away in 1983. After Eldon’s mother passed away in 1993, he purchased the family home-place and acreage near Twin Lakes.

Eldon was an active, life-long member of the United Methodist Church in Albert Lea. He was also a lifelong member in the American Legion and VFW including serving as Albert Lea VFW Post Commander and leading the local Military Honor Guard for many years.

He is remembered for his love of Christ, being a loving husband and father, positive attitude, unwavering patriotism, and kindness to everyone he met. He had an amazing memory about the people in the area and the history of the Albert Lea and surrounding communities.

Memorials are preferred to the United Methodist Church of Albert Lea or to the Parkinson’s Foundation. A memorial service is planned for June 20th, at 2PM at Bayview Freeborn Funeral Home. Burial will be in Shady Oaks Cemetery. Visitation will be 1 hour prior to the service at the funeral home.

To order memorial trees or send flowers to the family in memory of Eldon C. Schmitt, please visit our flower store.