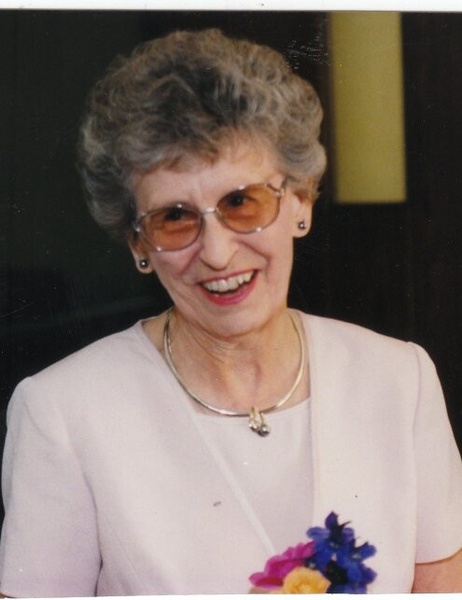 Eleanor A. Leiser (Calverley), 94, of Northfield, MN, formerly of Albert Lea, passed away at the Benedictine of Northfield on Monday, November 2. A Memorial Service will be held at 11AM on Wednesday, November 18 at Bayview/Freeborn Funeral Home with Rev. Don Malinsky presiding. There will be a public visitation one hour prior to the service. Burial will be at Clarks Grove Cemetery with Rev. Steve Leiser officiating the committal ceremony. Eleanor was born on March 15th, 1926 to Alfred and Nora Christensen in Bath Township. She grew up on a farm outside of Geneva, MN. In 1943 she graduated as Salutatorian from Ellendale High School. Eleanor married James Calverley on September 17th, 1944 at Clarks Grove Baptist Church. Together they had four children. She was active in the Farther Lights and Mission Circles at the Clarks Grove Baptist Church. She also taught Sunday School there. Eleanor worked at Dee’s Grill and for many years at Wilson & Co. in the accounting department. She enjoyed crocheting afghans, reading and sudoku. We all fondly remember Saturday mornings when she would stir up a batch of her famous cinnamon rolls. On January 10th, 1981, Eleanor married Robert Leiser. They moved to Green Valley, Arizona. There she attended and was active in the Valley Presbyterian Church. After Bob’s death she returned to Minnesota. Surviving her are her four children; Carolyn (David) Hanson, Ame (Marcelyn) Wiger, James (Amy) Calverley, Mark (Dawn) Calverley; 11 grandchildren, 21 great grandchildren, and 8 great-great grandchildren. Also surviving are four stepchildren; Steve (Jennifer) Leiser, Colleen (Gary) Brudvig, Mark (Josephine) Leiser, Christine (Randy) Hills and many step grandchildren and step great grandchildren. Her sister, Lucille Kubista, of Waseca also survives. She was preceded in death by her parents, Alfred and Nora Christensen, husbands James Calverley and Robert Leiser, brothers Virgil (Orla) Christensen, LaVerne Christensen, Marlin Christensen, brothers in law Elmer Kuyper and George Kubista.

To order memorial trees or send flowers to the family in memory of Eleanor A Leiser, please visit our flower store.