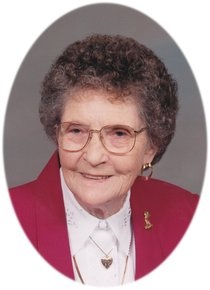 Funeral services for Ella M. Bleckeberg, age 95, of Albert Lea, will be held at 2:00 p.m. on Saturday, March 25, 2017 at Bayview/Freeborn Funeral Home.  Rev. Don Malinsky will officiate.  Interment will be at Hillcrest Cemetery.  Visitation will be one hour prior to the service at the Funeral Home on Saturday. Online condolences are welcome at www.bayviewfuneral.com.

Ella M. Bleckeberg was born December 28, 1921 in Albert Lea, the daughter of LuVerne and Phoebe (Hatch) Larson.  She attended Trenton School in Freeborn.  On December 22, 1939, Ella married Ernest Bleckeberg in Mora, Minnesota.  She worked at Streaterâ€™s, retiring in 1984.  Ella was a member of Salem Lutheran Church, Lydia Circle, Sew-N-Tell, and the Salem Senior Group.

To order memorial trees or send flowers to the family in memory of Ella M Bleckeberg, please visit our flower store.