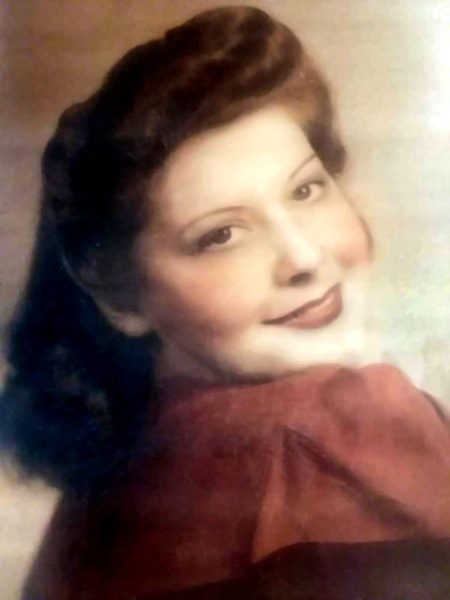 She graduated from Leath High School in May, 1943. On March 24th, 1944, she married Wilbert Pagel. She and Wilbert had 12 children and divorced in 1975. Esther never remarried.

Esther was a humble woman that lived her life with strength, courage and ingenuity. She generously loved her family, being with children, enjoying music and laughter. Esther also enjoyed working in her large garden. Using the skills she learned as a child, she started her own home-based business as a seamstress as well as upholstering furniture for many in the community. Esther was a faithful Christian and a member of the Church of Jesus Christ of Ladder Day Saints, often staying positive by "Counting her Blessings".

A heartfelt thank you to daughter-in-law, Rayna Pagel for the care and attention she gave to Esther while living at Good Samaritan's long term care facility for the years she was there. Having her close by, as mom's guardian angel, was reassuring for everyone who loves her. While there, Esther enjoyed the music and activities for the residents.

Esther's service for family members will be held September 25th, 2021 at Bayview Funeral Home in Albert Lea. The service will be livestreamed and recorded via Bayview Freeborn Funeral Home’s website.

All in the community are welcome to attend the Celebration of Life to be held at Edgewater Large Pavilion from 4pm to 6pm, September 25th, 2021.

In lieu of flowers, memorials can be sent to Good Samaritans Society of Albert Lea in support of their activities and music programs, Salvation Army of Albert Lea or her church, The Church of Jesus Christ of Ladder Day Saints of Albert Lea.

To order memorial trees or send flowers to the family in memory of Esther Pagel, please visit our flower store.