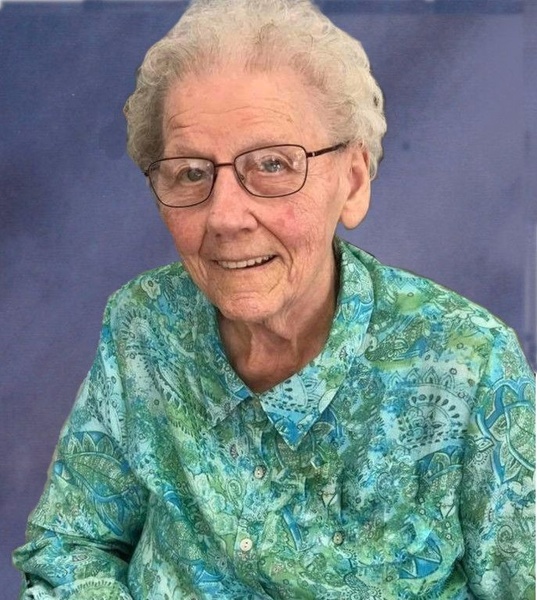 Evelyn Harriet Anderson, formerly of Clarks Grove and Geneva, passed away on May 17, 2022, at Oak Park Place in Albert Lea.

Funeral Service will be held at Bayview/Freeborn Funeral Home in Albert Lea, MN on Saturday, May 21, 2022, at 11am, with a visitation starting at 10am.  Burial will immediately follow at Hillcrest Cemetery.

Born August 25, 1927, Evelyn was the fifth of Henry and Minnie Rupp’s six children. The family farmed in Walters, MN, and Marshfield, WI, before moving to Albert Lea after Henry passed away in 1937.

Evelyn attended school through the 9th grade and at age 15 began working at a small cafe in Albert Lea to help support her family. At the cafe, she washed dishes, waited tables, and met Allen C. Anderson. Allen and Evelyn’s connection was strong, and they were married on January 2, 1944.

The couple spent 40+ years farming in the Clarks Grove area. After their wedding, they moved in with Allen’s parents to help operate the family farm just south of Clarks Grove. In the spring of 1949, they purchased their own farm north of Clarks Grove where they raised four children – Carolyn, Neil, Jane, and Peggy – produced livestock, grew crops, and gardened.

In 1985, Allen and Evelyn moved to Geneva, and Evelyn began working at the Cottage Cafe and had her own specialty cake business. She brought comfort to family and friends alike with a variety of homemade specialties, including Swedish meatballs, buns, donuts, cinnamon rolls, Confirmation mints, cream puffs, pies, cookies, corn dogs, and “snoblotchers”. Her cakes were the centerpiece at countless birthdays and family celebrations.

A special thanks to Oak Park Place and its staff for the loving care they showed Evelyn over the past four years.

To order memorial trees or send flowers to the family in memory of Evelyn Anderson, please visit our flower store.