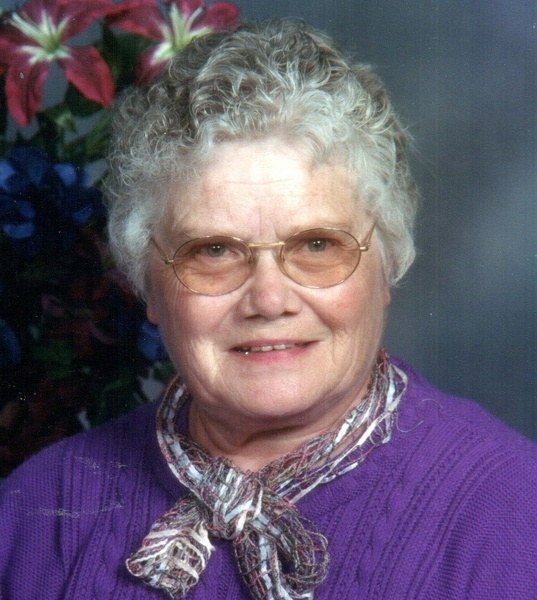 A celebration of life for Fern will be held at Gateway Park in Emmons on May 14, 2022. Visitation from 11 am to 1 pm. Memorial service 1 pm. Interment will be at East Freeborn Cemetery.

Fern Deloris (Flugum) Johnson / Wahlers passed away to enter the Gates of Heaven on Saturday, January 15, 2022. Fern was born to Oscar & Emma Flugum on September 1, 1930, in Albert Lea, MN. She graduated from Ellendale High School in June of 1949. She was united in marriage to Albert Johnson at Community Lutheran Church on February 3, 1951. Fern & Albert lived in Janesville, MN where Albert was an auto mechanic at the local auto dealership. They had four children before his passing in October of 1959. Fern raised their four children in Clarks Grove and eventually moving to the family acreage near Geneva, MN. Fern was united in marriage to Daniel Wahlers on October 15, 1974. They enjoyed life and square dancing until Dan’s passing in June of 1991.

Fern was a lifelong member of Geneva Community Lutheran Church where she participated in the choir and taught Sunday school. She was very artistic and created many beautiful banners for the church that are still used. She enjoyed participating in art classes to improve her creativity. Oil painting, pottery, ceramics, wood carving and quilt making were among her many talents. Fern was a kind soul to people and animals as she usually adopted the critters that her children came home with.

Fern retired from Owatonna Tool Company in 1995 after 20 years of employment. After her retirement, she drove for Senior Ride Services. She enjoyed travelling and experiencing new sites across America. Among her favorite trips was one to Norway to visit her family’s ancestral descendants and one to Hawaii where she participated in a marathon.

A celebration of her life will be held at Gateway Park in Emmons on May 14, 2022. Visitation from 11 am to 1 pm. Memorial service 1 pm. Interment will be at East Freeborn Cemetery.

To order memorial trees or send flowers to the family in memory of Fern Deloris (Flugum) Wahlers, please visit our flower store.