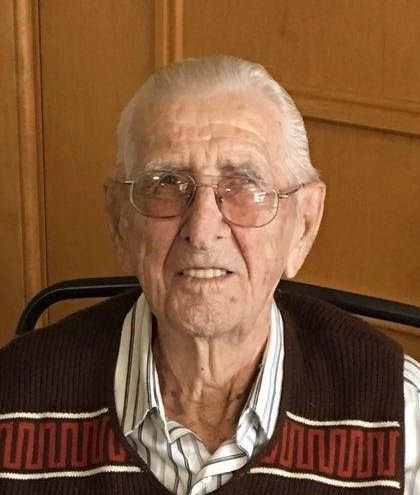 Fred was born on October 10, 1918 to Louis and Josephine Belshan in Freeborn County. He attended country school in Shellrock Township. Fred married Gladys Kycek on July 21,1943 in Albert Lea. They were blessed with 3 children - Carolyn Lowman, Calvin Belshan, and Donna Thompson.

Fred was a lifetime farmer in Freeborn County. He started farming southeast of Myrtle. In the 60’s he purchased the farm where he was born and raised and in the early 70’s he and Gladys moved there. This farm eventually became a century farm. In his lifetime farming went from using horses to tractors that steer themselves using GPS.

Both Fred and Gladys enjoyed spending hours in their gardens. He and Gladys also enjoyed listening to old time music, dancing, traveling, and wintering in Texas. He was a member of ZCBJ Lodge #44 of Hayward and a member of Bethlehem Lutheran Church of Myrtle.

A private family service will be held at Bayview Funeral Home on September 1, 2020. Interment will be at the Bohemian National Cemetery, Myrtle, Mn.

He will be remembered for being able to visit with anyone he met and his sharp mind to the very end.

To order memorial trees or send flowers to the family in memory of Fred Belshan, please visit our flower store.