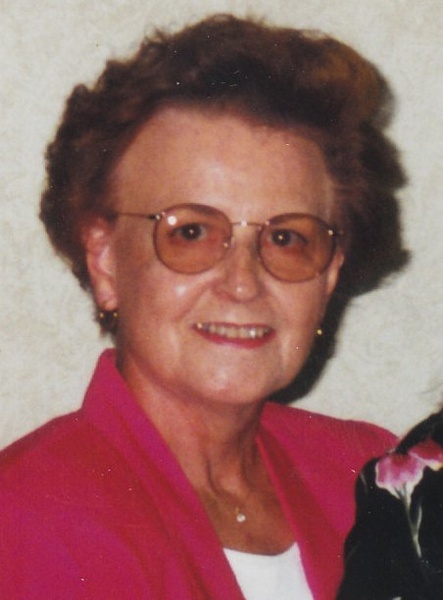 Memorial Service for Garnet Folie will be held at 1:00 PM on Monday (5/10) at Bayview Freeborn Funeral Home. Rev. Jamie Cameron will officiate. Burial will be in East Freeborn Cemetery. Visitation will 1 hour prior to the service at the funeral home. Masks will be required upon entry.  Online condolences are welcome at www.bayviewfuneral.com. The service will be livestreamed via Bayview Freeborn Funeral Home’s website.

Garnet was born on January 23, 1933 at Naeve Hospital in Albert Lea. She was the daughter of Alfred C. and Olga E. (Johnson) Peterson. Garnet was baptized at First Baptist Church in Clarks Grove and Confirmed at Community Lutheran Church in Geneva where she would later serve on the Church Council. She grew up on a farm north of Clarks Grove and rode her pony Jiggs to Country School District #5 through 8th grade. Garnet attended Ellendale High School. While in high school she worked as a clerk at Clarks Grove Mercantile during the summer. She graduated in 1951 as her class valedictorian. After school, Garnet worked for 2 ½ years at the Register of Deeds Office in Albert Lea. After her time there, Garnet went to work at the State Bank of Clarks Grove. She started as a teller and worked her way to the title of Cashier. She retired in 1997 after 44 years.

On October 15, 1960, Garnet married Leroy H. Folie at the First Baptist Church of Robbinsdale, MN. Together they both enjoyed traveling. They took road trips to Washington, New York, Colorado, California, the Black Hills, and Yellowstone National Park. They took tours to Europe, Scandinavia, Hawaii, Alaska, and Ireland. Garnet and Leroy also took bus tours to Branson and many day trips around the area such as the State Fair and Nelson, WI for an Ice Cream Cone.

Garnet enjoyed many hobbies such as: hardanger for which Garnet won many ribbons at the Fairs, sewing quilts, knitting, crocheting, riding her horse Pete in the summertime, watching birds, growing flowers, mowing lawns, playing piano and singing old hymns, and doing the crossword puzzles in the Tribune. She also had a love for all animals, especially her cat Elvis.

She was preceded in death by her parents Alfred and Olga Peterson; siblings Kenneth Peterson and Barbara Peterson; sister-in-law and brother-in-law Lois and Chuck Squires; and great niece Katherine Thorson.

The family would like to thank the amazing Mayo Hospice team.

In lieu of flowers, memorials are preferred to Peace and Power and First Lutheran Church in Albert Lea.

To order memorial trees or send flowers to the family in memory of Garnet Ione Folie, please visit our flower store.