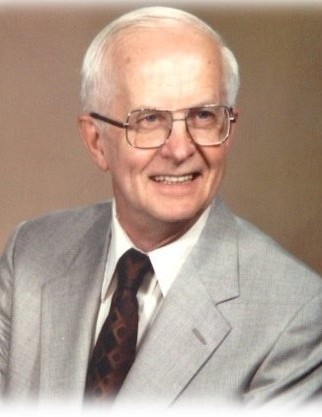 Memorial services for George E. Oetjen, age 101, of Albert Lea, will be held at 2:00 p.m. on Friday, February 16, 2018 at First Presbyterian Church, Albert Lea.  Rev. Dwight Netzer will officiate. Interment will be at Graceland Cemetery.  Visitation will be one hour prior to the service at the church. Online condolences are welcome at www.bayviewfuneral.com.

George Edward Oetjen was born in Blue Island, Illinois to Lillie (Sickman) and George H. Oetjen on October 6, 1916.  He graduated from Blue Island High School in 1934 and from Grinnell College, Grinnell, Iowa in 1941.  He was an avid tennis player and lettered in the sport in both high school and college.  Following graduation he began employment with Sears Roebuck, then entering  the army in January 1943  where he was stationed at Ft. Warren, Wyoming for basic training.

On August 3, 1943 he and Winifred George were united in marriage in Herrick Chapel at Grinnell College in Grinnell, Iowa.  Following their marriage, George entered Officer Candidate School in Louisiana, graduating with the commission of 2nd Lt. in the Army Transportation Corps.  He was stationed at the New Orleans   Port of Embarkation as a Port Officer.  He and Winifred resided in New Orleans until 1946 when his active military duty was complete and he held the rank of Captain.  In 1948 he became a member of the 419th Military Government Unit, headquartered in Winona, MN.  He remained active in this army reserve unit until 1990 when he retired with the rank of Lt. Colonel.

George was employed by Sears, Roebuck Company for 23 years, assisting in the opening of the Albert Lea  store and continuing as its assistant manager until 1965 when he took early retirement  to become a real estate broker.  He was associated with Countrywide Real Estate and NOW Real Estate.

He was a member of First Presbyterian Church of Albert Lea where he served as a deacon, elder, and trustee.  He was also a member of Golden K Kiwanis Club.  George was an accomplished woodworker, crafting beautiful cedar chests for his daughters and daughters-in-law. His love of nature and gardening was something he passed on to several of his children and he was always busy planting and maintaining trees, shrubs and flowers.  Until recent years he had a faithful friend in his dog.   He was an avid reader and a volunteer in a number of community endeavors.

In lieu of flowers, the family requests that donations be made to the ecumenical food pantry at the First Presbyterian Church of Albert Lea.

To order memorial trees or send flowers to the family in memory of George Edward Oetjen, please visit our flower store.