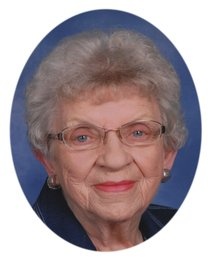 Funeral services for Gladys I. Wagner, of Albert Lea, will be held at 10:00 a.m. Saturday, September 10, 2016 at United Methodist Church in Albert Lea.  Pastor John Mitchem will officiate.  Interment will be at Hillcrest Cemetery.  Visitation will be one hour prior to the service at the church on Saturday.  Bayview/Freeborn Funeral Home is assisting with the arrangements.

Gladys Irene Sorensen was born November 29, 1928 at Albert Lea, Minnesota, the daughter of Viggo and Emma (Larson) Sorensen.  She grew up in Alden and graduated from high school there in 1946.  She continued her education at the Naeve Hospital School of Nursing where she earned a baccalaureate RN degree in May of 1949.

On November 24, 1949, Gladys was united in marriage to Russel J. Peterson at the First Baptist Church in Clarks Grove.  They were the parents of two sons, Gary and Paul.   Russel passed away in 1960.

Gladys married Harley I. Wagner on November 2, 1968 at Albert Lea. Harley had been a widower with three sons; Ron, Rob and Steve.  A daughter Lori was added a year later.  Gladys referred to her blended family as â€œYours, Mine and Oursâ€.   Harley passed away in 1993.

Gladys enjoyed a nursing career that spanned over forty years.  She worked at Naeve Hospital, in public health and as night supervisor at St. Johnâ€™s Lutheran Home.  She was active in the Naeve Nurses and Alumni Club serving as secretary for many years.

In her retirement years, she enjoyed traveling to Europe and Mexico.  She liked going on bus trips to theatre productions in the Twin Cities also.  Gladys spent many happy hours working on jigsaw puzzles with her friends at the Lake Chapeau Condos.  She was a fine cook and equally talented at needlepoint, hardanger and crocheting. She was a tireless church worker and served on many committees; always willing to help when called upon.

Gladys had a generous and caring heart.  She practiced kindness in her words and actions and believed that angels guided our paths.   â€œSee I am sending an angel ahead of you to guard you along the way and to bring you to the place I have prepared.â€  Exodus 23:20

To order memorial trees or send flowers to the family in memory of Gladys Irene Wagner, please visit our flower store.