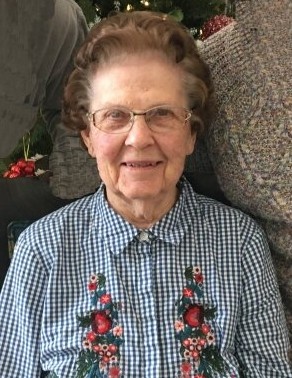 Hilda Harriet Sellner, 93, passed away on January 28, 2021 at Milestone Memory Care Unit in Faribault, MN.  A Funeral Service for Hilda will be held at 11AM on Friday, May 7, 2021 at Bayview/Freeborn Funeral Home in Albert Lea, MN with a visitation one hour prior to the service.  Interment will take place at Steele Center Cemetery in Steele County, MN. The Funeral Service will be livestreamed from Hilda’s Obituary page on Bayview’s website.  The livestream will begin five minutes prior to the service.  Online condolences are welcome at www.bayviewfuneral.com.

Hilda was born on March 15, 1927 in Steele County, MN to Ludwig A. and Marie Schultz.  She worked at Schulz Jewelry.  Hilda was united in marriage to Wilfred Sellner on June 13, 1948 at Aurora Lutheran Church.  After marrying Wilfred, Hilda began working for Josten’s Jewelry while they lived in Owatonna.  Later the couple moved to Albert Lea and Hilda worked at Fountain Industry.  After Wilfred’s retirement from Interstate power company the couple moved to Bemidji, MN.  They purchased a lake resort on Lake Plantagenet which they called Sellner’s Resort.  They owned and operated the resort for several years.  Hilda and Wilfred would sell the resort after many years of running the resort and they moved back to southern Minnesota.

Hilda enjoyed quilting and dancing to old time music which she did to the age of 90.  Hilda had a sweet tooth and loved to bake delicious baked goodies.

In lieu of flowers memorials are preferred to the Alzheimer’s Foundation, Brighton Hospice, and Steele Center Cemetery.

To order memorial trees or send flowers to the family in memory of Hilda Harriet Sellner, please visit our flower store.