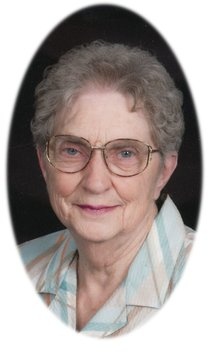 Memorial services for Irene Hansen, age 88, of Albert Lea, will be held at 11:00 a.m. on Wednesday, December 21, 2016 at Bayview/Freeborn Funeral Home.  Rev. Dwight Netzer will officiate.  Friends may greet the family 5:00-7:00 p.m. on Tuesday, December 20 at Bayview/Freeborn Funeral Home and one hour prior to the service at the funeral home on Wednesday. Online condolences are welcome at www.bayviewfuneral.com.

Irene A. Hansen was born April 15, 1928 in Albert Lea, the daughter of Chris and Johanna (Kjar) Andersen.  She graduated from Albert Lea High School.  On May 5, 1948, Irene married Harlen Hansen.  She worked as a telephone operator for Northwestern Bell.  Irene was a member of Trinity Lutheran Church.  She was also a member of Telephone Pioneers, Danish Brotherhood, Meals on Wheels, and Bridge Club.  She enjoyed sewing, crocheting, quilting, soap operas, and dancing.  She particularly enjoyed taking care of her grandkids and baking with them.

To order memorial trees or send flowers to the family in memory of Irene Hansen, please visit our flower store.