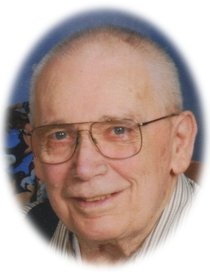 Funeral services for James "Jim" Arthur Jensen, age 83, of Albert Lea, will be held at 10:30 a.m. on Wednesday, June 8, 2016 at First Lutheran Church.  Rev. John Holt will officiate. Interment will be at Graceland Cemetery.  Military Honors will be accorded by the V.F.W. and American Legion Honor Guard. Visitation will be 4:00-7:00 p.m. on Tuesday, June 7, 2016 at Bayview/Freeborn Funeral Home and one hour prior to the service at the church on Wednesday. Online condolences are welcome at www.bayviewfuneral.com.

James A. Jensen was born on November 7, 1932 in Albert Lea, the son of Wallace and Emyline Jensen. Jim grew up in Clarks Grove and Ellendale, attending grade school in Ellendale and graduating from Albert Lea High School.  After graduation, Jim enlisted in the U.S. Army.  Once he returned from the service, he farmed with his family until his 70s.  He also worked as a driver for Clothing Care Center for 15 years and then maintenance at the hospital for 25 years.  On September 12, 1964, Jim married Lois Arlene Peterson at First Lutheran Church in Blooming Prairie.  He was a member of the American Legion.  Jim enjoyed watching race car driving, football, and wrestling since 1954.  He loved watching his kids and grandkids in their school activities.  Jim enjoyed fishing, farming, arguing with his son, and spending time with his great-grandbabies.

Jim was preceded in death by his parents; and brothers, W. Manfred and Melvyn.

To order memorial trees or send flowers to the family in memory of James "Jim" Arthur Jensen, please visit our flower store.