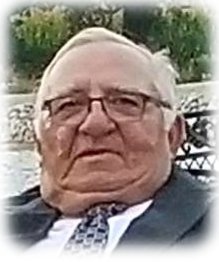 Funeral services for James J. Koziolek, age 83, of Albert Lea, will be held at 11:00 a.m. on Friday, May 31, 2019 at Bayview/Freeborn Funeral Home.  Father Kurt Farrell will officiate. Interment will be at Owatonna Memorial Gardens.  Visitation will be from 5:00-7:00 p.m. Thursday, May 30 at Bayview/Freeborn Funeral Home and one hour prior to the service at the funeral home on Friday. Online condolences are welcome at www.bayviewfuneral.com.

James Joseph Koziolek was born on March 28, 1936 in Wells, Minnesota, the son of Stanley and Agnes (Klocek) Koziolek.  He attended several years of parochial school in Wells until the family moved to New Richland where he graduated from New Richland High School.  On April 23, 1957 James was united in marriage to Carol Ann Moen at St. Joseph’s Catholic Church in Owatonna. He farmed until 1969 and worked at Wilson’s for 33 years, retiring in 1988.  He enjoyed hunting and fishing.  He loved spending time with his sons and grandchildren. James was a huge fan of the Vikings and Twins.  He was a member of St. Theodore Catholic Church and the N.R.A.

To order memorial trees or send flowers to the family in memory of James Joseph Koziolek, please visit our flower store.