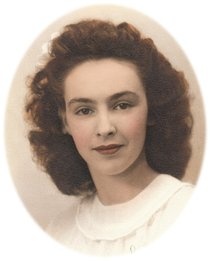 Jean Helen Dudley was born in Albert Lea on October 28, 1927.  She went to Abbott and Albert Lea High Schools, where she graduated at the age of 17 in 1945. On September 27, 1945, she married the love of her life, Robert Viker Lunde, who was from Moscow Township in rural Freeborn County. They were married almost 52 years, until Robertâ€™s death in 1997.  Robert worked at Hormel and Jean worked as a Division Manager at Sears. They lived in Austin, MN, until 1991, at which time they moved to Santa Maria, CA.  They travelled extensively during the time they lived in both Minnesota and California.

Jean was preceded in death by her husband Robert, and daughter Lanna Lunde. She is survived by daughter Linda Lunde of Kerrville, Texas, and sons, Dusty Lunde and wife Yong Mi of Gig Harbor, Washington and Daniel Lunde and wife Martha, of St. Paul, Minnesota. She is survived by grandchildren Shanna, Hannah Jade, Hattie, Sarah, Isaac and Nils Lunde and great-grandchildren Natalie, Melanie, Glenn, Lucia and Gunnar. Jean is also survived by brother and sister in-law Vernon and Beverly Lunde of Hayward, Minnesota, as well as many nieces and nephews.

To order memorial trees or send flowers to the family in memory of Jean Helen Lunde, please visit our flower store.