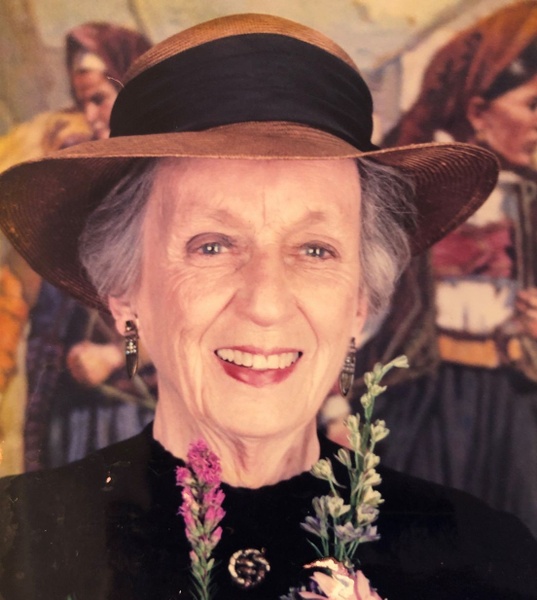 Dorothy Joan Regina Schmiedeskamp Muschler (Yes, that is really her whole name), 95, of Albert Lea, passed away June 5, 2022, surrounded by family after a full and joyous time on earth.

Joan was born on February 8, 1927, in St. Louis, Mo. She grew up in nearby Kirkwood with her parents, Walter and Kathryn, and two brothers, Harold (Hal) and Walter (Wally). She graduated from Webster University in Kirkwood in 1948 with a degree in education. “At that time women could become a teacher, a secretary, a wife, or a nun,” she would tell her children. She tried them all. After college she moved to Southern California to teach elementary school, taking the train across the country by herself, and working in the Bakersfield area for a couple of years before moving home after her mother’s death. She then worked as an executive secretary at the local county health department where she met Robert Parker Muschler. After one date, she had to tell Robert that she was on her way to a convent for a trial period as a nun, to which her future husband replied, “I’ve never heard that one before,” a line their family quotes to this day. She lasted six months in the convent, hampered by early morning prayers, and ultimately called to a vastly different life. She returned to work at the health department and after one more date, Robert asked her to marry him. She gave the engagement a 6-month trial period. They were married November 5, 1955. It was a marriage of two equals and a loving partnership of 53 years until Robert passed in 2008.

Joan and Robert had six children in ten years and moved in 1965 to Albert Lea where they made their home. Joan, who worked on and off as a teacher’s aide while her children were young, then found her passion in helping establish the Albert Lea Community Theatre and later the Minnesota Festival Theatre, a professional summer stock company. She starred in dozens of productions starting with her first show as Miss Adelaide in Guys & Dolls, one of her favorite roles. She was an extremely talented performer with extraordinary comic timing that remained throughout her life. She easily shifted from musicals into comedic roles and then dramatic roles that challenged her in new ways. Although, she couldn’t always settle on which role was her favorite, among the contenders: Dolly Levi from “Hello, Dolly!,” Rose from “Gypsy,” and Golda from “Fiddler on the Roof” (her all-time favorite show). Though she loved performing, she was as active behind the scenes doing costumes, props, make-up or whatever she was called on to do, after all “the show must go on.” She eventually directed several shows, including a wonderful version of “A Christmas Carol,” another favorite. For a long while, she held much of the theater’s costume shop in the family basement allowing her to dress herself up and anyone who would join her to have a bit of fun. Thanksgiving dinners included Pilgrim hats and Christmas caroling was done in Dickens costumes.

She served on numerous boards, development committees, and other leadership positions in Albert Lea. She was a ball of positive energy that could make anything an event to remember, which she did on a daily basis. She threw cast parties like no others in her beloved Lake Room. Fundraisers had themes (though not always successful ones, like the polka party complete with Bavarian pretzels and beer). She had dress-up tea parties with all her grandchildren, most of whom were boys, and always wrote the loveliest thank-you notes for even the smallest kindness. She had a penchant for Art Deco, hats, Christmas, the Vikings, fancy glasses, scotcharoos and Rob Roys (but never before 5 p.m.) Joan had an ability to identify and nurture the talent or gift in every single person she met so that they could share it with the world. She was inspirational to all who encountered her and made every person, group, and community that she engaged better. She combined her background in education and her love of theater into creating numerous children’s productions, workshops and curricula for the local school districts that introduced the performing arts to hundreds of children in and around Albert Lea. She will be missed by all who had the good fortune to cross her path, especially her grandchildren, who all adored her. The family is saddened by our loss but gladdened by her life and the impact that she had on us and others.

A memorial celebration will be held at Bay View Funeral Home in Albert Lea, MN on August 20th at 2:00 pm with a reception following the service to share stories and memories. In lieu of flowers, please consider a donation to Albert Lea Community Theatre in her memory. https://www.facebook.com/ACT-on-Broadway-164879623522113/app/250457581338

To learn more about Joan and experience her sense of humor and joy watch this interview from August 2021. https://www.martisartstudio.com/docent-debates

To order memorial trees or send flowers to the family in memory of Dorothy Joan Regina Schmiedeskamp Muschler, please visit our flower store.