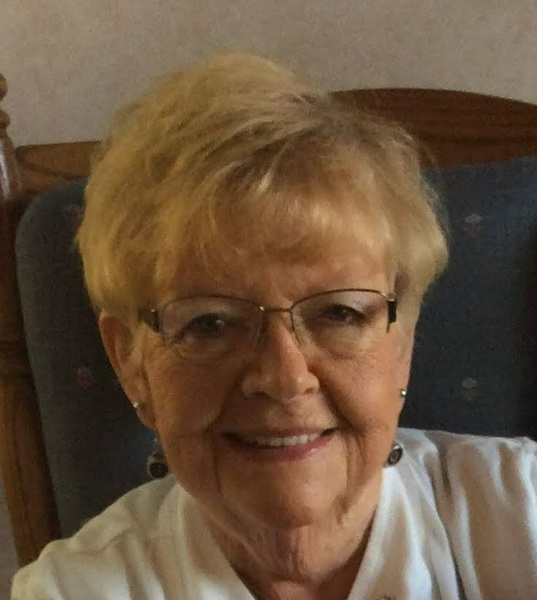 Joanne E. Hanson was welcomed into heaven by her first husband, Lyle E. Johnson on Thursday, November 25, 2021. There is little doubt in their four daughter's minds, that the reunion started with a long overdue dance.

Funeral Services for Joanne will be held Friday, December 3, 2021 at 2pm at United Methodist Church, Albert Lea. Pastor John Mitchem will officiate. Visitation begin at 12:30 on Friday at the church. Burial will be at Hillcrest Cemetery, Albert Lea.

Joanne Elaine was born the second of ten children to Elvin and Dorothy (Thompson) Beighley on July 2, 1940. She was blessed to be born into a large family, where memories of gathering and holidays were surrounded with music, much being self-taught, and singing. Each sibling had their own instrument of choice, but Joanne proudly played the accordion, while singing harmony with her seven brothers and two sisters. As she had her own family, it was holiday tradition that she would brush off the dust and try to play a few tunes she still remembered. The great grandchildren were in awe!

Lyle and Joanne started a life of their own in Borne, Massachusetts, where he was stationed in the Air Force. While stationed there, they welcomed the first of four daughters. Both growing up in the Gordonsville and Glenville area, they decided to make the big move to Albert Lea, which they made their home forever. This is where their final three girls were born.

Joanne was widowed at the young age of thirty-six, where she took on the role of both parents. This is when her family, became known as Joanne and her four girls. She took this challenge head on and was proud of her accomplishments as a single parent, as were her girls proud of their mother. Her motto was always telling people that she raised four daughters that knew how to work hard and play hard, what more do you need! She had a special bond with all her son-in-laws, and she loved them like her own...so here's to you Mom and to the Charlie Charlies we shared, many great memories with these at the table.

Joanne always worked out of the home, and was a great role model for her daughters, demonstrating that you could be both a great mother and a great employee. For years she worked as a secretary for the President of the First National Bank. One to never let grass grow under her feet and looking for different challenges, her next employment was at KATE Radio as the head bookkeeper and eventually into sales. A job she loved was being the court reporter for Judge William Sturtz, the two had a very special bond as they worked together daily. Finally, she came to retire from Alliant Energy, and her next job was her favorite, becoming the fun grandma and Gigi to her 8 grandchildren and 11 great grandchildren.

After losing Lyle, she continued to enjoy friendships through playing cards, bowling and golf. She was a fierce competitor and never liked to lose. One of her fondest memories was winning the Supper Skipper bowling league with her mom, Dorothy, daughter Susie and niece Lynda on team Susie's Salon. She also enjoyed drawing and painting, that she shared with friends and family. Sewing was her passion during her free time, her specialty was sewing curtains for all of her girls and grandchildren's homes. Joanne was known for her great popcorn, delicious party chex, pumpkin bars and wintergreen mints stored in her favorite red candy dish.

After being single for years, she married Harold "Hody" Hanson, and they had 17 years of fun together as a couple, and he became the only grandpa the grandkids came to know. After his passing, Joanne found support from her daughters, who at this point were her friends. Never wanting to see her alone, she was introduced to a wonderful man in Sparta from her youngest daughter. Stan Herrman and Joanne had great years of traveling, attending weddings and family time on both sides. He gave Joanne the nickname of "Annie" and she beamed every time he used it.

Joanne was blessed in many ways, but she also had hardships. She recently had surgery in Rochester that eventually took her life. Her family is devastated, as it is not longer Joanne and her girls, but just her girls. Fly high Mom, you deserve the peace!

Joanne was proceeded in death by her husbands, Lyle and Hody; very special friend, Stan Herrman; her parents, brother, Terry Beighley; and numerous other in-laws, nieces and nephews, and special friends, Gary and Sharon Seedorf. May they all rest in peace together.

Here's to you Mom, we love you and miss you already!

To order memorial trees or send flowers to the family in memory of Joanne Elaine Hanson , please visit our flower store.