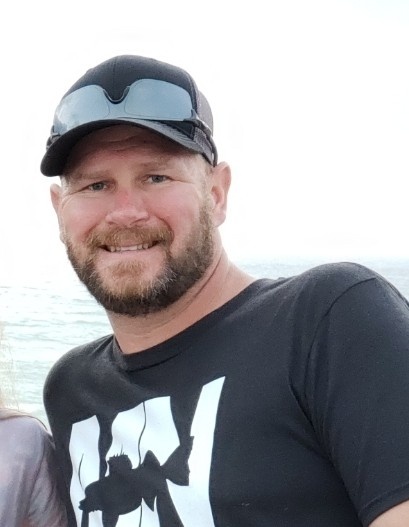 Funeral Services will be held on Saturday, March 13, 2021 at 2pm at Zion Lutheran Church. Pastor Krusemark and Pastor Lehman will officiate. Burial will immediately follow at the Hollandale Cemetery.  Visitation will be Friday, March 12, 2021 from 4-7 at Bayview/Freeborn Funeral Home and 1 hour prior to the service at the church.  The Funeral Service will be live streamed from the Bayview/Freeborn Funeral Home's Facebook page.  The live stream will begin about 5 minutes prior to the start of the service.

Justin was born July 12, 1980 in Albert Lea, MN to Julie and Dan Kohn. He graduated from Albert Lea Sr High in 1999 and went on to Riverland Community College to play baseball and get his carpentry degree. Justin met the love of his life, Lori Hoffman, in the small town bar in Hollandale. Neither of them knew each other prior and growing up only 5 miles away from each other. Justin and Lori were married May 5, 2007. Together they raised 3 children, Treavor, Caleb and Carly. Justin married into farming and loved every minute of it. He loved being able to be outside daily and in a tractor and helping his father in law Barry with the potatoes and sweet corn. In the winters he would do local carpentry jobs.

Justin loved the outdoors, hunting, fishing, sports and most of all his family. His wife and kids always came first. He was an avid hunter and fisherman and was able to share these passions with the kids. He enjoyed watching, playing and coaching sports. He was very competitive and instilled that drive into the kids. He was blessed to be able to coach Treavor and Caleb in baseball for several years and Carly in softball. Justin played football and baseball in high school and continued with baseball into college and then Albert Lea Colonels. He also played in a foosball league and in the most recent years in the winter played dartball in the church league. He was highly competitive and it was his goal every year to come home with a dart for one of the highest batting averages. Justin is probably most well known for his softball days. He played slow-pitch from the age of 15 until 2 years ago when he received his diagnosis. He played on many teams and leagues throughout the years but always played in Maple Island. He was known on the field for his great sportsmanship, his laser hits down the 3rd base line, his powerful, effortless home run hitting swing, and one heck of an arm from left field. Justin was also a volunteer firefighter with the Hollandale Fire Department for 12 years and the chairman and trustee at St. Paul’s Lutheran Church in Hollandale.

Justin was a kind and generous soul. He would help anyone and not expect anything in return. He was a blessing to all those that knew him.

He was preceded in death by his grandparents Betty and Donald Page; infant nephews Lawson and Austin Kohn; childhood friend JT Schumacher.

To order memorial trees or send flowers to the family in memory of Justin Jay Kohn, please visit our flower store.