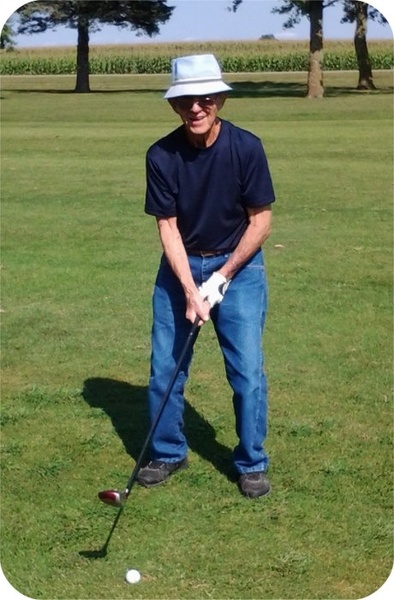 Memorial services for Kenneth L. Heine, age 87, of Albert Lea, will be held at 11:00 a.m. on Thursday, July 27, 2017 at Concordia Lutheran Church of Pickerel Lake.  Rev. Peter Soli will officiate. Interment will be at Concordia Lutheran Cemetery.  Military Honors will be accorded by local servicemen’s organizations. Visitation will be one hour prior to the service at the church on Thursday.

Kenneth Lee Heine was born on February 4, 1930 to Fred and Bertha Heine in Albert Lea and he grew up on a farm in rural Conger.  From March of 1950 to 1954, Kenny served in the Air Force during the Korean War, attaining the rank of Staff Sergeant.  He worked on B-29s as an electrician stationed in Shreveport, Louisiana and North Africa.   After his military service, Kenny returned to Conger where he took a position with the Conger Co-op Creamery.  He served as the creamery manager from 1963 until his retirement in 1998.

He met Sandra Stoneking in 1962 and they married on August 25, 1963.  They flew to Breezy Point for their honeymoon in Kenny’s private plane.

Kenny and Sandy lived most of their lives together in Conger where they raised their three children, Linda, Carla and Scott.  In 2013 they moved to Bancroft Estates in Albert Lea.

Kenny was active in his church and community.  He was a lifetime member of Concordia Lutheran Church of Pickerel Lake where he served in church leadership.  He served as Mayor of Conger, was active in Conger Commercial Club and served many years as a volunteer fireman.  Kenny was also a member of the American Legion, and V.F.W.  Kenny loved sports.  He pitched fast pitch softball for many years and was inducted into the Freeborn County Softball Hall of Fame.  He and Sandy bowled on leagues for many years and Kenny loved being on the golf course.  Additionally, Kenny was an avid fan of the Vikings and Twins.  He enjoyed playing cards and going to dances.  Kenny and Sandy enjoyed many vacation road trips and visited Hawaii, Mexico, and wintered in Texas.  Kenny was a supporter of the Freeborn County Relay for Life.

Kenny was proud of his children and enjoyed many years of special times with his many grandchildren.  Kenny was grateful for his close friends.  He enjoyed fishing, airplanes, and WWII history.

Memorials preferred to the American Cancer Society and the Michael J. Fox Foundation for Parkinson’s Research.

To order memorial trees or send flowers to the family in memory of Kenneth Lee Heine, please visit our flower store.