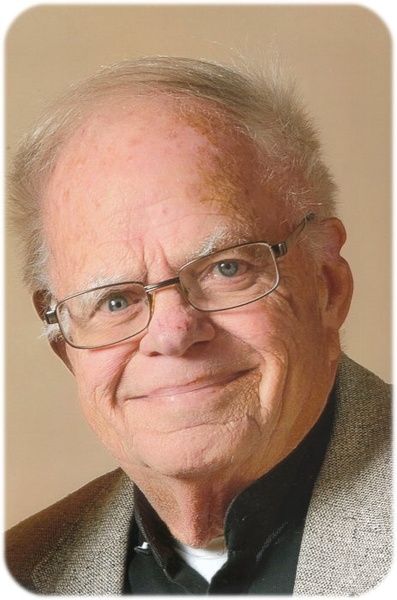 Memorial Service will be held on Saturday, August 24, 2019 at 10 a.m. at Bridge Community Church, 2016 Bridge Ave, Albert Lea, MN 56007. Rev. Clayton Balsley and Rev. Mark Miller will officiate. Burial will be at Graceland Cemetery, Albert Lea. Military honors will be accorded by local veterans’ organizations. Visitation will be held from 5 – 7:00 p.m. on Friday, August 23, 2019 at Bayview/Freeborn Funeral Home and one hour prior to the services at the Church on Saturday.  Online condolences are welcome at:  www.bayviewfuneral.com

On August 8, 2019, Kyle Orville Olson drove his brand new 1949 Studebaker through the gates of Heaven.  Kyle was born on June 4, 1940 to Olaf and Gladys Olson in Albert Lea, Minnesota.  He lived with his parents, grandma Helen, aunt Ardis Omundson and cousin Maryjo while his uncle Red served overseas.  He attended Albert Lea schools and delivered the Albert Lea Tribune.  He was hired to drive ambulance when he was 15 by Lindahl Ambulance Service.  He would get called out of class to go and make a run.  After high school he attended Austin Junior College.  He worked for Jess Jackson when he took over the ambulance business.  Jess became a second father to him and they remained extremely close until Jess passed in 1980.  Kyle also worked for Morris Furniture Company.

Kyle met the love of his life, Rosemary Herrmann while she was walking to her job at the Wilson Company.  He asked her out to a hayride and that was the end of their single lives.  They were married at Bass Lake Community Church in Delavan, Minnesota on July 27, 1963.

Kyle served in the National Guard and was training in Alaska with his friend, Dick Rye, when the largest earthquake to happen in North America occurred in 1964.  They agreed their eyes became big as saucers and the tables in the mess hall went six feet in the air.

Kyle started his 30 year career with the Freeborn County Sheriff's Department in 1967, a week before tornadoes destroyed part of Albert Lea.  He loved his coworkers who became like second family to him.  He only had one ticket book in his career and many times he had people stop by who had been in jail and thanked him for how kind he was.

Kyle had two children, Charlotte and Tony.  The family enjoyed road trips all over the country.  Their friends loved hanging out at their house because they knew they would be treated like family by Kyle and Rose.  They had several long term guests, Cathie Bickle and Jon Nordstrom who truly were like extra children.

After retiring Kyle and Rose opened the Foto Factory and with the help of their dear friend Cyndi Schmidt they took thousands of portraits and developed more pictures then can be counted.

Kyle was involved with the Elks, the American Legion, Day-Breaker Kiwanis, the Planning and Zoning Board, Park and Recreation Board, City and County Credit Union Board, Senior Resources Board.  Kyle worked at the county fair many years after he retired as a Special Deputy and always enjoyed catching up with people there.

Kyle was a lifelong member of First Baptist Church in Albert Lea.  He was a deacon and a youth leader.  He also went on mission trips to Alaska and South Dakota with Rose.

He loved to travel and had been all over the United States, Hawaii and Europe.

Kyle loved old cars, especially Studebakers.  He restored two of them and over the years owned many other cars.  His home and yard were his pride and joy.  He built a large light house for his pond where he kept fish.  He had been to many Johnny Cash concerts and went to Cher on his 40th and 50th birthday (to make sure his heart was working).

He worked as a volunteer for Senior Resources in their Ride Service program.  He liked nothing better than to put on over 500 miles in a week chatting with his riders the whole time.

His joys were his granddaughter, Kylie Helen Rose and his furry children. He raised Pekingese and Pomeranian puppies in the 60's  He especially loved Pixie who would visit him at Thorne Crest.  He recently acquired two lizards, Stude and Baker, which entertained him and all the rest of his friends there.

Kyle had the best of care at Thorn Crest and the people that worked with him were amazing.  He enjoyed most of all hanging out with his roommate Gary.

He was proceeded in death by his parents, grandparents, aunts, uncles many pets, especially his dog, Honey.

Memorials preferred to Youth for Christ or Human Society.

To order memorial trees or send flowers to the family in memory of Kyle O. Olson, please visit our flower store.