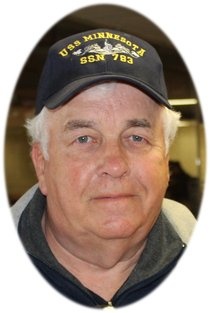 Funeral services for Larry D. Wyrum, age 69 of Anoka will be held at 11:00 a. m. Saturday, February 25, 2017 at Bayview/Freeborn Funeral Home in Albert Lea, MN.  Visitation will be held one hour prior to the service from 10-11 a.m. at the funeral home.  Interment with military honors will be at the Alden Cemetery following services.
Larry passed away unexpectedly on February 15, 2017.
Larry Duane Wyrum was born on September 18, 1947 in Albert Lea to Russell and Lillian (Riskedahl).  Larry grew up on the family farm near Hartland, MN.  He started his education at the little Buckeye Country School in Alden, later transferring to New Richland High School which he graduated from in 1965.  From 1966 to 1968 he served in the Army including active duty in Viet Nam.  Upon returning from Viet Nam, he married Diane Jacobson and they welcomed their only child, Rochelle.  After his time in the service, he began working for FMC building weapons systems for naval ships.  Over his career he became an inspector for FMC that became United Defense and then BAE.  As an inspector he travelled across the country inspecting systems on Naval Ships and had a ball cap from every ship.   In his career he was a member of the UAW for almost 44 years and worked a total of 48 years up until his last days. Larry appreciated the outdoors and wildlife wherever he saw it.  When he wasnâ€™t busy working he enjoyed spending time with his family.  His three grandchildren were the apple of his eye and he never missed a game, a dance performance, or any musical concerts.  May the Lord bless him and all the lives that he touched, for those who knew him will miss him forever.
Larry is survived his daughter, Rochelle (Dan) Hilson; and grandchildren, Annabelle, Sean, and Nolan; ex-wife and long-time friend, Diane; and siblings, Lowell, Dennis (Lorrie), Dianne (Dick) Donovan, Paul (Judy), and Julie Phillips. Larry was preceded in death by his parents, Russell and Lillian; sister-in-law, Joyce Wyrum; and brother-in-law, Neil Phillips.
Memorials may be directed to the Down Syndrome Association of Minnesota (www.dsamn.org).

To order memorial trees or send flowers to the family in memory of Larry Duane Wyrum, please visit our flower store.