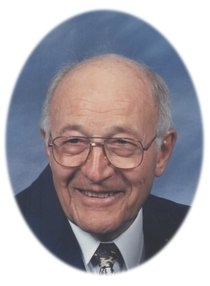 Memorial services for Leo Meyers, age 92, of Alden, will be held at 1:00 p.m. on Tuesday, June 7, 2016 at Redeemer Lutheran Church in Alden.  Rev. Greg Ofsdahl will officiate. Interment will be at a later date. A Masonic and Eastern Star Service will begin at 12:30 p.m. at the church. Military Honors will be accorded by the Alden V.F.W. and American Legion. Friends may greet the family one hour prior to the service at the church on Tuesday. Online condolences are welcome at www.bayviewfuneral.com.

Leo Nick Meyers was born January 6, 1924 in Arlington, Minnesota, the son of Hubert (Herb) and Mary (Bovy) Meyer. He grew up in Arlington and attended country school in Janesville, Minnesota.  Leo served his country in the U.S. Army, stationed in Texas during World War II.  On May 28, 1949, Leo married Beverly Schmidt.  A diesel mechanic by trade, Leo worked at Dave Syverson Ford, Piephos Moving and Storage, and Zetterholms.  A 50+ year member 32nd Degree Master Mason and member of the Order of the Eastern Star, Leo served in many leadership roles including Commander, Worthy Patron â€“ Eastern Star, and Grand Representative OES to Alabama.  He was a member of Redeemer Lutheran Church and on the Advisory Board to ALTEC.  He was active in securing scholarships for many college-bound students. Leo was an avid bee keeper (known as â€œThe Honey Manâ€) and enjoyed gardening, hunting, fishing, and woodworking.  Leo enjoyed his grandchildren and shared many life experiences and knowledge.

In lieu of flowers, memorials are preferred to Redeemer Lutheran Church or Mayo Clinic Research.

To order memorial trees or send flowers to the family in memory of Leo Nick Myers, please visit our flower store.