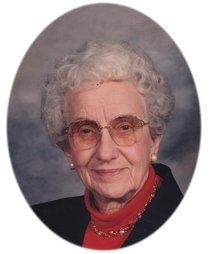 
Lorraine Gaard was born April 16, 1918 at the Clausen family farm near Kiester, Minnesota.  Lorraine was the youngest child of Carl Peter and Marie (Bendickson) Clausen.  She had 8 older sister and 3 older brothers.  Lorraine was baptized at Bethel Lutheran Church in Vinge, Iowa by Pastor Fjelstad and confirmed at the Lutheran Church in Kiester by Pastor J. A. Arneson.  Lorraineâ€™s education began in the rural one room school near the farm, continued at Kiester High School where she graduated in 1937, and then she attended the NaÃ¯ve Hospital School of Nursing, graduating as a registered nurse in 1940.
Lorraine had nursing positions at St. Olaf Hospital in Austin, Minnesota and the Coleman Hospital in Estherville, Iowa.  During this time she was courted by Marvin Gaard and they were married in Kiester, Minnesota on January 14, 1942 at the home of her sister Maureen and her husband Joice Rovang.  They rented farms near Frost and Thompson, Iowa before purchasing the present farm near the Oakland Lutheran Church in 1951.  The Oakland farm has been her residence since 1952.  Lorraine returned to work as a nurse at the St. Olaf Hospital in Austin in 1959 and worked on the surgical floor until her retirement in 1978.  She was head nurse from 1975-1978.
Lorraine was preceded in death by her husband Marvin in 2008, her son Adrian in 2007 and all 8 of her sisters and 3 brothers.  She is survived by her sons Sheldon and Lamoyne; grandchildren Lisa (Husband Trevor), Jason Gaard, Izabella Gaard; great grandchildren Aubrey, Caleb, and Sofi Gaard and Slater and Phoenix DeRaad.  There are also many cousins and other relatives.
Lorraine requested that gifts be made to Lutheran Day Nursery in Chicago, Psalm of Life, Pastor Nataneal Lutheran mission in Columbia, the Plymouth Youth Center in St. Paul and the Navajo Mission in Arizona rather than flowers at the funeral.

To order memorial trees or send flowers to the family in memory of Lorraine Gaard, please visit our flower store.