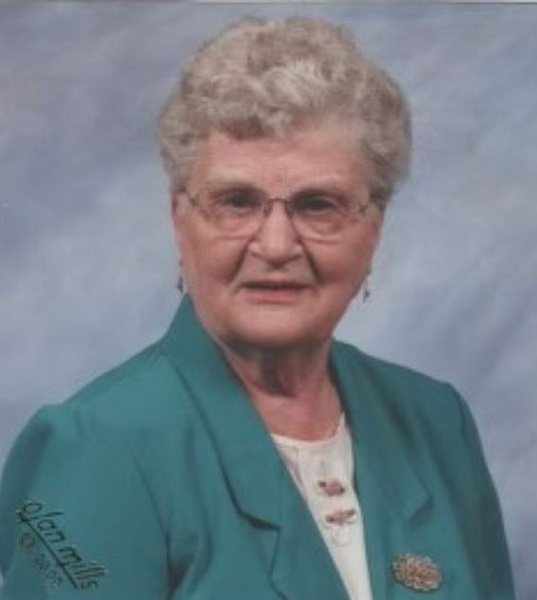 Memorial Service for Lorrie Fjermestad will be held at 10 AM, Saturday, September 10 at Bayview/Freeborn Funeral Home. Visitation will be held for one hour prior to service.

Lorrie Elaine Hahn Fjermestad was born in Northwood, Iowa, daughter of Lorenze Hahn and Nellie Oyer Hahn on January 19, 1928. She went home to Jesus peacefully on December 19, 2021, at St. John’s Lutheran home with her son Brian and granddaughter Jenny by her side.

Lorrie attended schools in Northwood, Lake Mills, Forest City and Kensett, Iowa, and Bricelyn and Ortonville, Minnesota. She graduated from Ortonville High School in 1946. She was active in the band, playing alto sax and oboe. She was also Feature Editor of the school paper. She moved to Albert Lea in the fall of 1946. She was united in marriage to Arnold Fjermestad in February, 1947. They made their home in Albert Lea and raised their four children here.

Lorrie was employed by Bo-Dean Beauty Supply as the Office Manager for 19 years. She was an active member of First Lutheran Church, teaching Sunday school, holding several positions on the FLCW Board involving Caring and Sharing, Mission Community, and she also worked on the new nursery and was a 40 year member of Circle #31.

After Lorrie’s retirement she became a full-time sitter for her grandson Brent. She also enjoyed many trips sponsored by the Senior Center and was an avid participant in the Senior Aerobics program. She also took many trips to Colorado to visit her two daughters and their families. Her 9 grandchildren were the joy of her life along with her 20 great and great-great grandchildren.

Lorrie was much loved by her family and will be dearly missed. Lorrie’s family would like to thank the staff at St. John’s Lutheran Home and Sheltering Arms for their kindness and care given to her.

To order memorial trees or send flowers to the family in memory of Lorrie Elaine Fjermestad , please visit our flower store.