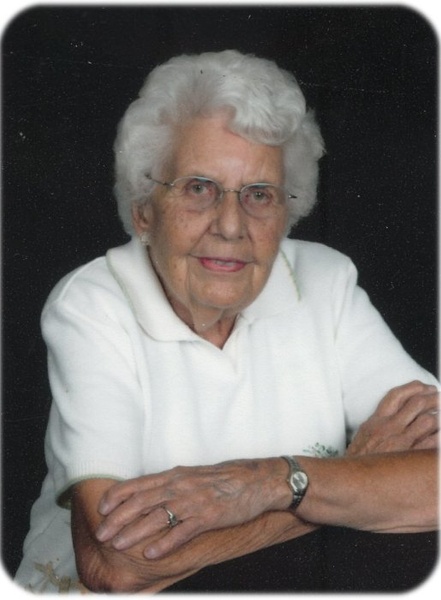 Marcella June Clausen, age 94, of Albert Lea and Faribault, Minnesota went home to be with the Lord on Monday, April 17 at District One Hospital in Faribault. Funeral services will be held on Thursday, April 27, at 1:00 PM at Trinity Lutheran Church of Albert Lea with a visitation one hour before the service.  Interment will be at Concordia Lutheran Cemetery.

Marcella was born on June 20, 1922 in Conger, Minnesota to Walter and Marie (née Buenneke) Steele. She graduated from Alden High School and attended the Minnesota School of Business in Mankato. She worked in the business office at Wilson’s in Albert Lea until her retirement.

She was married on June 2, 1946 to LuVerne Clausen and God blessed them with two daughters, Carol and Connie. For most of her adult life she was an active member of Trinity Lutheran Church in Albert Lea where she volunteered in the church office, delivered Meals on Wheels, attended Bible studies, and drove patients to Rochester for medical appointments. With LuVerne she hosted two trips to Israel. Marcella’s needlework still graces her children’s and grandchildren’s homes. She also enjoyed playing golf and was on a bowling league for years.

Marcella will be missed by her daughters, Carol (and Craig) Breimhorst of Faribault, MN, and Connie (and Tim) Booth of River Falls, WI; her grandchildren Dane (and Zoe) Breimhorst, Chad (and Barree) Breimhorst, Micah (and Zena) Breimhorst, Caleb (and Katherine) Drexler Booth, Joshua (and Lisa) Booth, and Leah Booth; 15 great-grandchildren; nieces, cousins and many friends.

She was preceded in death by her parents and step-mother, Erma Steele; her husband, LuVerne; her sister and brother, Eunice Hanson and Gerald Steele; and her nephew, Mike Steele.

To order memorial trees or send flowers to the family in memory of Marcella Clausen, please visit our flower store.