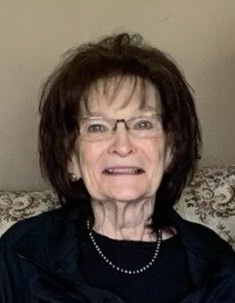 Marilyn Ovedia Anderson (Nelson), 81, of Albert Lea, passed away at peacefully at home.  A private Memorial Service will be held on Thursday, August 27 at Bayview/Freeborn Funeral Home with Rev. Josh Blair presiding.  Burial will be immediately following the service at Graceland Cemetery.

Marilyn was born on September 26, 1938 to Ralph and Selma Nelson at Naeve Hospital in Albert Lea.  Marilyn graduated from Albert Lea high school in 1956.  She married her lifelong sweetheart, Wyeth “Buddy” Anderson on December 14, 1957 in Rushford, MN a relationship that grew from grade school.  During and following high school, she worked Phil’s Café in Albert Lea.  After high school, she worked for a time at Northwestern Bell Telephone Company.  She then went to own and operate Jake’s pizza with her family for 20 years.  Together, Marilyn and Buddy enjoyed traveling across the United States and abroad, golf outings, trap shooting competitions, fishing trips in northern Minnesota, and most of all family time.  They enjoyed spending their free time with their children, grandchildren, great grandchildren and friends.  She was a devoted wife, mother, and grandmother.  Marilyn will be deeply missed.  Blessed be her memory.

To order memorial trees or send flowers to the family in memory of Marilyn Ovedia Anderson, please visit our flower store.