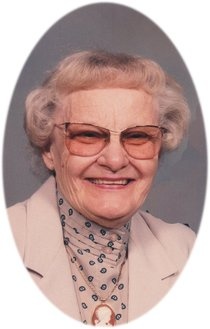 Memorial services for Marjorie Dammen, age 87, of Blooming Prairie, will be held at 11:00 a.m. on Friday, July 22, 2016 at Bayview/Freeborn Funeral Home.  Rev. John Holt will officiate. Interment will be at Hillcrest Cemetery.  Friends may greet the family one hour prior to the service at the funeral home. Online condolences are welcome at www.bayviewfuneral.com.

Marjorie Phyllis Dammen was born January 1, 1929 in Albert Lea, the daughter of Ira and Charlotte (Peterson) Grove.  She graduated from Albert Lea High School.  After graduation, she worked at Montgomery Wardâ€™s.  On February 25, 1949 she married Calvin Dammen.  The family moved to Mason City where Marjorie worked for Sears.  After retirement in 1989, they moved back to Albert Lea.  Marjorie enjoyed being a homemaker, painting ceramics, and planting and caring for flowers.

Marjorie was preceded in death by her parents, husband Calvin, brothers Robert Grove and Richard Grove, and sister Beverly Grove.

To order memorial trees or send flowers to the family in memory of Marjorie Phyllis Dammen, please visit our flower store.