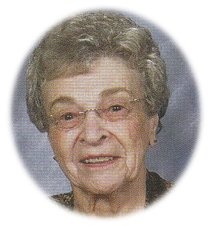 Memorial services for Marjorie Jean Evenson, age 94, of Albert Lea, will be held at 10:30 a.m. on Saturday, July 23, 2016 at the First Lutheran Church.  Rev. Douglas Mork will officiate. Interment will be at LeSueur River Cemetery in New Richland.  Friends may greet the family one hour prior to the service at the church on Saturday.

Marjorie Evenson was born on August 18, 1921 in New Richland, the daughter of Otto and Susan (Sandretzky) Foels.  She graduated from New Richland High School in 1938.  On September 11, 1942, Marjorie was united in marriage to Oswald Evenson. She was a bookkeeper at various businesses, including St. Johnâ€™s for many years.  Marjorie was a member of First Lutheran Church, the Mission Circle, and the Womenâ€™s Auxiliary of the American Legion. She enjoyed roses, playing cards, reading, crossword puzzles, and song birds.  She loved time with family and had the ability to say the right thing at the right time, always comforting and undemanding.

To order memorial trees or send flowers to the family in memory of Marjorie Evenson, please visit our flower store.