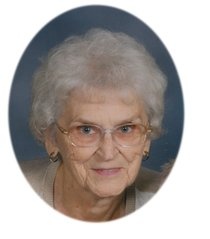 Funeral services for Martha Wangen, age 89, of Albert Lea, will be held at 11:00 a.m. on Tuesday, December 27, 2016 at Oakland Lutheran Church.  Rev. Waldemar Gies will officiate. Interment will be at Oakland Cemetery.  Visitation will be 5:00-7:00 p.m. on Monday, December 26, at Bayview/Freeborn Funeral Home and one hour prior to the service at the church on Tuesday. Online condolences are welcome at www.bayviewfuneral.com.

Martha Caroline Ramsey Wangen was born in Freeborn County, Minnesota to parents John A. and Clara Knutson Ramsey on November 2, 1927.  She was baptized and confirmed at East Freeborn Lutheran Church.  She attended Bell School and graduated from Albert Lea High School in 1945.  She was employed at Farmers State Bank of Hayward, MN until her marriage to Orin J. Wangen on June 27, 1948 at East Freeborn Lutheran Church.  She was a member of Oakland Lutheran Church and was active and served in various organizations of the church.  Martha was a hardworking and caring farm wife that took care of her family as well as all of her chickens.  She was Orinâ€™s main care-giver for several years.  She always had the coffee on and plenty of goodies on hand, and always looked forward to the grandchildren stopping by or attending their functions they were involved in. Martha and Orin spent over 15 years at Happy Days Resort in Nevis, MN. They loved to fish and teach all of their grandchildren to fish.

To order memorial trees or send flowers to the family in memory of Martha Caroline Wangen, please visit our flower store.